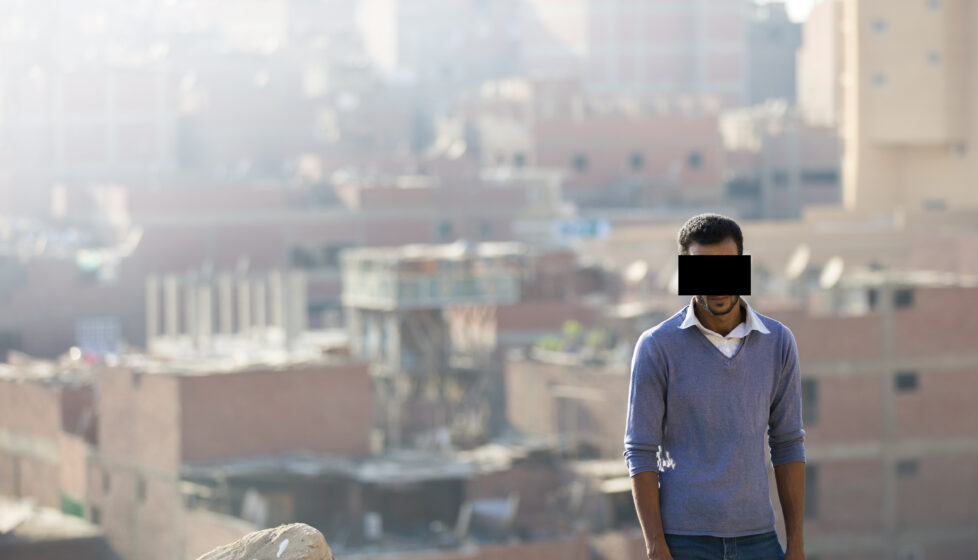 Walid hated his Christian co-worker so much that he planned to kill him. But a bold act of love set him on a new course – directly to Christ.

After listening to his co-worker, Haytham, sing Christian worship songs for several days as they painted a house in Cairo, Walid had finally had enough.

His ultraconservative Muslim father, who had five wives and 32 children, had taught him early in life that he should hate all Christians. That deep-seated hatred had already led him to beat Haytham with a wooden stick for singing along with the Christian songs playing in his earbuds. And since that hadn’t stopped the singing, Walid decided to silence him permanently.

One night after work, Walid grabbed a knife and followed Haytham into the streets. After making sure they were alone, he attacked Haytham from behind, stabbing him in the side. Haytham turned to look at his attacker as he fell to the ground writhing in pain, and Walid made eye contact with him before fleeing the scene.

Expecting a visit from the police, Walid hid anxiously at his aunt’s house. “I tried calling some of my friends to see if [Haytham] was alive or dead,” he said. “They told me someone attacked him and they had to remove one of his kidneys.”

To his great surprise, Walid also learned that Haytham hadn’t filed a police report against him. Yet he knew Haytham had seen his face.

Weeks later, Walid felt secure enough to leave his aunt’s house and begin looking for a new job. But while walking down the street one day, a taxi struck him, crushing one leg and one arm. Walid spent the next 15 days in the hospital.

As he lay in his hospital bed one morning, he was startled to see Haytham and a few of his Christian friends walk in carrying fruit and drinks. Walid screamed, thinking they had come to kill him.

“Why are you screaming?” Haytham asked. “I am just coming to say that I am sorry for what happened to you.”

Haytham could sense Walid’s fear as they began to talk. “Don’t worry,” he assured him. “I will never do something bad to you. You are really dear to my heart. I love you.”

“How come?” Walid asked nervously. “I attacked you. You still love me?”

“My God told me to love you whatever you do to me,” Haytham replied.

“No, you don’t love me!” Walid yelled. “You are going to do something! You hate me!”

Realizing that he had upset Walid, Haytham placed the fruit and drinks on the table and left with his friends.

After Walid was released from the hospital, a friend from the painting crew checked in on him regularly to see how he was doing. He also gave Walid money during the several months that he couldn’t work. At first Walid simply thanked him for his generosity, but as the money kept coming, he grew suspicious.

“Why do you give me this money?” Walid asked.

“Someone knows your case,” the friend said. “They gave me this money to give to you.”

For days, Walid pestered his friend for the name of the donor. Then, finally, he insisted on knowing.

“It’s Haytham,” his friend told him.

Walid decided he couldn’t accept the money he’d received since leaving the hospital. The Quran had taught him to never let a non-Muslim have authority over him, so he returned the money to Haytham.

“You are not better than me,” Walid told him. “Just take your money.”

“Listen, you are like my brother,” Haytham replied. “You are dear to me. I will not take it.”

The two continued to squabble until finally Haytham pointed to a nearby beggar.

“You can just give it to this poor lady,” he said, grabbing the money and handing it to her.

The hatred Walid felt for Haytham suddenly turned to admiration as he realized he had never seen anyone like him before. Overwhelmed by guilt, Walid recalled all the times he had hurt Haytham only to receive love in return. It made no sense to continue hating him.

From then on, Walid considered Haytham his friend … as long as he didn’t talk about Christianity.

Walid soon returned to work with the painting crew, and as before, Haytham and another Christian blasted worship music through their earbuds while they worked. Although Walid still objected to their music and their singing, he respectfully moved to another part of the building instead of beating them.

After working until 1:30 a.m. one day to finish an urgent job, they decided to meet at a 24-hour cafe. When they were ready to head home for a few hours of sleep before starting the next day’s work, Walid realized he had missed the last train home and would have to spend the rest of the night at the cafe.

Walid knew he shouldn’t stay at a Christian’s house, but he also knew he would sleep better if he stayed with Haytham. Exhausted, he accepted the offer.

Haytham insisted that his guest take the bedroom. Walid again accepted, and as he walked into the room, he suddenly found himself standing before a wall-size mural of Jesus.

“I was completely shocked when I saw the picture of Jesus,” Walid told a VOM worker.

Staring at the mural, Walid had mixed feelings of awe and remorse. He wondered how Christians knew that Jesus was the Son of God.

After Haytham left the room, Walid’s heart began to fill with hatred. The feelings of awe vanished, and he spat on the mural of Jesus.

As he slept that night, Walid dreamed of two angels that showed him a bloody, slain lamb. Suddenly, the blood of the lamb covered his eyes. As he wiped the blood away, he could see that the lamb was now fully healed and alive.

“I felt the lamb was calling me and asking me to follow him,” he recalled. “When I woke up, all I wanted to do was go away from the house.”

Walid didn’t tell anyone about the dream, and the next night he stayed awake as long as he could in fear that the dream would return. “Maybe Allah is punishing me because I slept in a Christian house and I need to repent,” he thought. The next day, he visited a local mosque to pray and meet with an imam.

He continued to do his best to be a good Muslim, but he still feared a return of the dream each night. When he visited a mullah to discuss the nagging dream, the Islamic leader only yelled at him.

As he endured the mullah’s abuse, Walid thought he heard another voice telling him the mullah was only after his money. When he asked the mullah if he’d heard the voice, he was accused of having an evil spirit.

“How come all this time I have committed to Muslim praying and there is an evil spirit dwelling in my body?” Walid asked him.

“Don’t worry, just give me some money and I will give it to the Muslim leader,” the mullah said.

His suspicions confirmed, Walid left the mosque. He immediately decided to leave Islam, but he still felt something was missing.

A few days later at work, one of the Christian painters noticed that Walid seemed distant. He asked him how he was doing, and Walid told him about his dream and the strange experience with the mullah. The Christian then gave him his pastor’s phone number and suggested Walid discuss everything with him.

Walid called the pastor, who listened patiently as he wrestled with questions about God. Instead of asking for money afterward, the pastor simply told him to pray about everything.

“Just call out to God and He will reveal Himself to you,” the pastor urged.

Walid hung up the phone and ran to the roof of the building he had been painting. Struggling to understand his thoughts and feelings, he yelled his questions at God: “Did you create me just to suffer? Are you real?”

“I was just trying to talk this out in front of God, who I didn’t know yet,” he said.

Walid said he then saw a vision of Jesus, full of light. When the vision ended, he felt joy and comfort for the first time.

“I felt like I was a changed person,” he said.

Walid gave his life to Christ on the spot and prayed for the first time as a Christian.

He started looking for a church to attend just days later, and during the first service he attended, the pastor gave him a Bible and told him he was welcome to worship there.

Walid kept his faith a secret from his family for as long as possible. After a year, however, his family learned the truth, and his brothers beat him until he lost consciousness. When Walid awoke, he discovered bruises and wounds all over his body. His brothers warned him that he would be beaten again if he continued worshiping Jesus.

As Walid recovered from the painful beating, Matthew 10:33 came to mind: “But whoever denies me before men, him I will also deny before my Father who is in heaven.”

Immediately, his brothers beat him again. The beatings then turned into a daily occurrence. At one point, they bound his hands and legs, leaving him unable to move for long periods of time. They fed him the scraps from their meals as if he were a dog. They also took his phone and other belongings.

Eventually, Walid’s family brought a mullah to their home to convince him to return to Islam. He told Walid that the evil Christian spirit would not leave him until he made a pilgrimage to Mecca, in Saudi Arabia. His family then took him to Mecca, continuing to beat him even in the Islamic holy land, but he managed to escape and return to Egypt.

“During this time I was alone, but Jesus’ voice was with me and was comforting me, encouraging me,” he said. “God helped me survive.”

Today, Walid lives with his church’s choir director in Cairo. He still hides from his family, believing they want to kill him, as he searches for work. He has taken on many new challenges as a Christian convert from Islam, but he is not alone in his adversity. Converts from Islam to Christianity face many difficulties, including expulsion from families, divorce by Muslim spouses, loss of children and loss of jobs.

Walid is grateful, however, that he has many Christians in his life who care for him, including a man he once tried to kill.