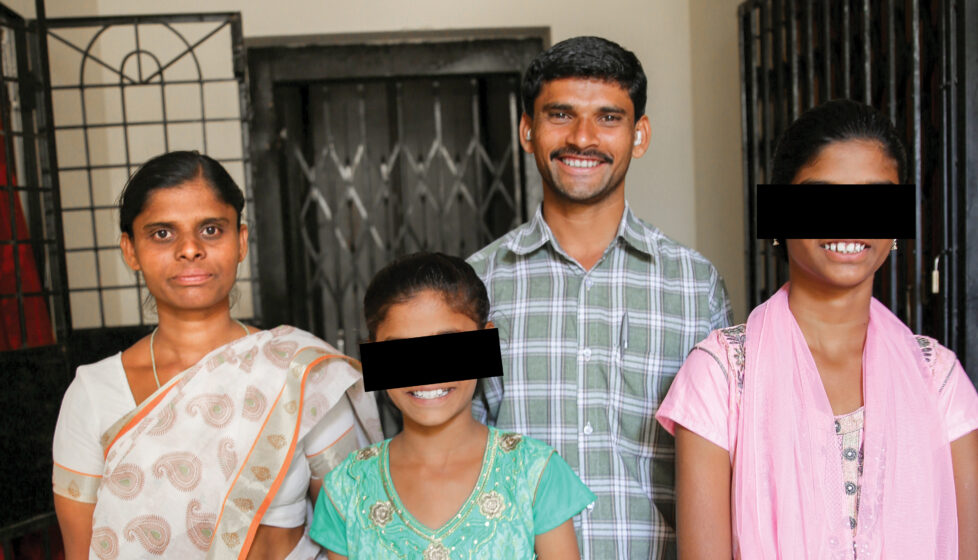 At 9 p.m. on Feb. 7, 2016, Pastor Kabir finished leading a prayer service at Savior’s Church in the heart of one of India’s slums. He then left his congregation of 40 believers and boarded a bus to travel home to his wife, Ishita, and their two daughters, just as he did every other Sunday evening.

This time, however, four men followed the 37-year-old pastor home. The men, all members of a youth militia called Hindu Yuva Vahini, stopped the bus three miles from Kabir’s home, dragged him off the bus and kidnapped him.

They took him to an old, empty building, where they planned to force him to deny Jesus on video. Like other Hindu nationalist groups, such as the prominent Rashtriya Swayamsevak Sangh (RSS), Hindu Yuva Vahini seeks to forcibly reconvert those who leave Hinduism.

The men surrounded the pastor, brutally kicking and punching him for 15 minutes. One of them repeatedly hit him on the head with the handle of a knife, and with each blow Kabir pleaded with God to spare his life. He pledged to serve Him more zealously if he survived.

As the pastor lay on the floor bleeding and writhing in pain, one of his attackers started recording him with the video camera on his smartphone. Another man ordered Kabir to say that he would no longer follow Jesus and that he would return to Hinduism and worship its idols again.

The men again beat the pastor and demanded that he deny Christ for the video. And again, he refused. The pattern of demands, refusals and beatings continued for 90 minutes, until the men finally grew tired and frustrated with Kabir’s stubbornness.

“You are [supposed to be] a Hindu!” one of them shouted. “You are converting everybody to Christianity here. Tomorrow, if I see you again holding a Bible and going like this, I will kill you!” They then burned Kabir’s Bible and let him go.

One of the attackers put Kabir on a motorcycle, took him about a mile away and told him to get off the bike. Disoriented, bleeding and in severe pain, Kabir called a friend to pick him up and take him home.

“God has spared my life, so I will forgive them,” Kabir thought. “I will not go to [the police] station. I will not get any case on them. What I am doing presently I am going to do double work for the Lord.”

When Kabir returned home around 11:30 p.m., his wife and daughters were shocked to see him bloodied and in pain.

“I was scared,” Ishita admitted. “Our children, both of them, thought, ‘God has saved my father’s life.’ They were grateful to Him.”

Still in pain the next morning, Kabir decided to go to the hospital, where he learned that he had a ruptured eardrum in his left ear, a tear in his right ear and a fractured skull. He would need multiple surgeries.

“I felt like my ears were gone,” he said. “There was no sound and my head was very heavy.”

As Kabir recovered from his injuries, a friend discovered that the attackers had posted video of the incident on a closed Hindu Yuva Vahini Facebook page. The video had been edited to make it appear that Kabir had reconverted to Hinduism.

A pastors’ network that supports Kabir reported the video to authorities, and the four men were eventually arrested. “I am praying for them every day,” Kabir said, “that they should be saved, come to church and accept Christ. If I see them, I will go and tell them, ‘God loves you and I am praying for you. How are you?’”

Kabir has pastored some of India’s poorest Christians for over 12 years, and he had never experienced persecution before this attack. Now, having stood boldly for Christ in an attack by radical Hindus, he is ready to do more for God’s kingdom.

“I have grown in my faith and I will do double the work,” he said a month after the attack. “If it happens again in the future, I am not scared. Whatever God wants, let Him do. If I am here, I will keep doing the work. If I die, I go to His kingdom.”

Kabir has been faithful to his word. His church has grown to 60 members, his outreach ministry has doubled and he now ministers in two villages. In 2018, VOM gave him a bicycle to help him keep up with his growing ministry.

Like Kabir, Ishita knows that God will be with her family if they face more persecution. “There is persecution in Christian life, so I know that God is there with us,” she said. “I am not scared because God has told that He is always with us and He is going to protect us and He is strengthening us.”

The couple’s daughters also have gained a new perspective on their faith since the attack.

“Whatever happens, God is there; He will protect us,” said then 15-year-old Vanya. “I am not going to put my faith down. I am happy that dad is safe.”

“I am happy with my father’s faith,” added then 13-year-old Myra. “I want my father to do more work. We are not going to lose our faith. We are going to serve the Lord in the future.”

VOM has helped pay for Kabir’s medical care. While surgery helped restore his left ear, doctors were unable to repair the damage to his right ear, and he now requires a hearing aid. Kabir asks that readers pray for his family and for his continued healing. He also requests prayer for his attackers and for the very poor people who live in the area where his church is located.

Kabir is committed to pastoring and serving the poor, following Jesus’ example. And he is grateful for the persecution he has faced because it has deepened his relationship with his Lord.

“In the Christian life there is persecution,” Kabir said. “Now God has allowed me to taste it.”