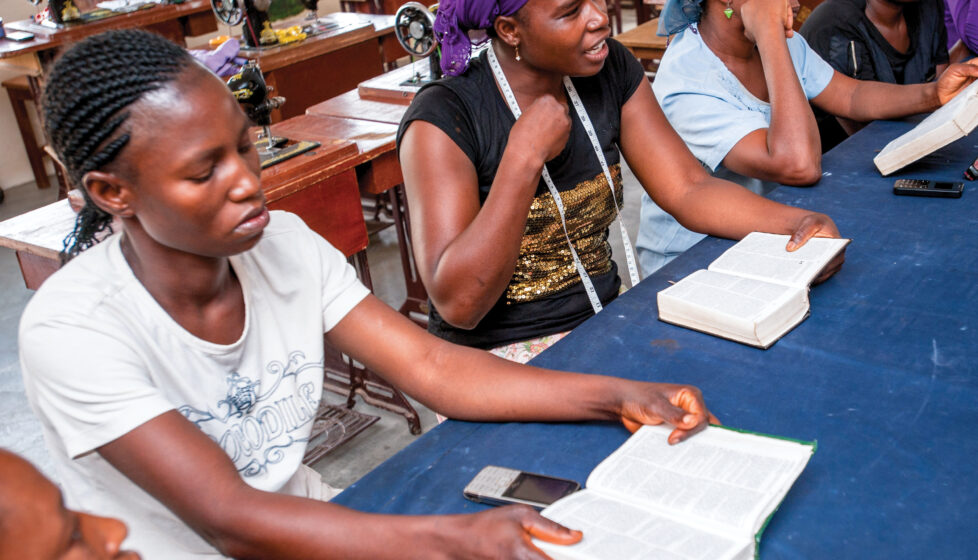 Ruth was leafing through the Bible in her room when her younger sister walked in.

“Mom! Ruth has one of those books that belongs to the Christians!” her sister yelled as she ran from the room. Panicked, Ruth shoved the Bible under her mattress.

Ruth’s mother and sister ransacked the room looking for the forbidden book, but they somehow overlooked it even though they flipped the mattress. “If I find a Bible, only Allah could save you,” her mother warned.

Ruth lived in a Muslim village located in Adamawa state, northern Nigeria. She and her brothers and sisters lived with their mother, while their father supported the family by working in another state. Like 60 percent of Muslim girls in the north, Ruth never learned to read. At age 19, she still spent her days helping her mother with housework.

Ruth didn’t think much of Christians; they were infidels, and the ones she knew behaved immorally. However, one Christian boy — a pastor’s son — always nodded politely and smiled when she walked past. Still, she wanted nothing to do with him.

Then, one day the boy stopped Ruth and told her he had dreamed that she converted to Christianity. Offended, she responded rudely and kept walking. But for days, she kept thinking about what he had said. She felt restless as she considered the possibility. “If I convert to Christianity,” she thought, “what about my parents?” She knew her family would reject her if she left Islam.

Ruth thought about the boy’s comment for two weeks before finally deciding the Lord was speaking to her. She then met with a pastor, who prayed with her to receive Christ and gave her a Bible, which she tucked under her knee-length veil before heading home. But that evening, her sister caught her looking at the “Christian book.”

“I was scared, and knew in my mind if I tell them [I became a Christian], something bad will happen,” she said.

After talking with the pastor again, Ruth gathered her courage and announced to her family that she had become a Christian. Her mother told her she was an insult to the family and ordered her to start on her chores.

Later, after Ruth had finished the housework, her mother gave her some homemade yogurt. Soon after finishing it, Ruth experienced stomach cramps and began foaming at the mouth. Her mother and brothers then dragged her outside and left her in the front yard to die.

Some of Ruth’s neighbors, who found her lying in the yard, rushed her to the hospital.

While Ruth recovered over the next three days, her mother came to visit and brought her a gift of nuts. But after tasting the nuts and examining them more closely, the pastor decided to throw them away. He suspected that they, too, had been poisoned. Ruth stayed at the pastor’s house after recovering from the poisoning, but her difficulties as a Christian were only beginning.

One day, Ruth’s mother called and said she was struggling to keep up with the housework now that she had no help. Despite her mother’s attempts to kill her, Ruth dutifully agreed to come help her.

As Ruth worked at her family’s house that day, she heard a knock at the door. Her mother wasn’t home at the time, so her older brother answered the door. He opened the door and welcomed three men into their home; Ruth recognized all three as members of the Islamist group Boko Haram. Ruth’s brother walked to his room, while the three men walked toward her and said they had come to see her.

Then the attack began. The men held her down, beat her and raped her repeatedly until she lost consciousness.

When Ruth’s mother returned, she found her lying on the floor bleeding severely. Ruth told her mother that her brother had arranged the attack, but she refused to believe it. Ruth then returned to the pastor, who took her to the hospital for treatment.

Realizing her family was never going to accept her new faith, Ruth decided it was time to leave. Her pastor arranged for her to move to another city, but she felt lost and useless in the home where she was staying. Then, in 2016, her caretaker arranged for her to attend a discipleship training school where she would study the Bible and learn a vocational skill. “I was excited when they told me about the school,” she said.

When Ruth arrived at the school, she discovered that all the students were like her — former Muslims who had fled their homes after coming to know Christ. And, like her, they had experienced persecution after becoming Christians. Some had been abandoned, while others had been beaten or forced by their family to marry a Muslim.

Ruth felt a sense of belonging at the school. “I was encouraged that I am not the only one who left Islam and came to Christianity and [had experienced] all the issues I have gone through,” she said.

She spent a year in the VOM-supported program, studying the Bible, memorizing verses and enjoying fellowship with the other Christian converts. One of the things she learned about during her study was forgiveness. “I was finding it difficult in my heart,” she said, “but then I made a decision that I would forgive those who hurt me. No matter how it hurt and no matter what happened to me, I would forgive.”

After graduating from the program, Ruth became an apprentice in a sewing shop run by a Christian woman. Now in her early 20s, she will soon be fully prepared to run her own sewing shop. She is learning to read and write, and she is currently dating a Christian man under the supervision of her Christian guardian. She hopes to get married one day.

Ruth experienced horrible persecution after placing her faith in Christ, but she has persevered in faith with the help and encouragement of other believers. When asked if it was worth it to become a Christian, she replied softly, “Yes, it was worth it.”