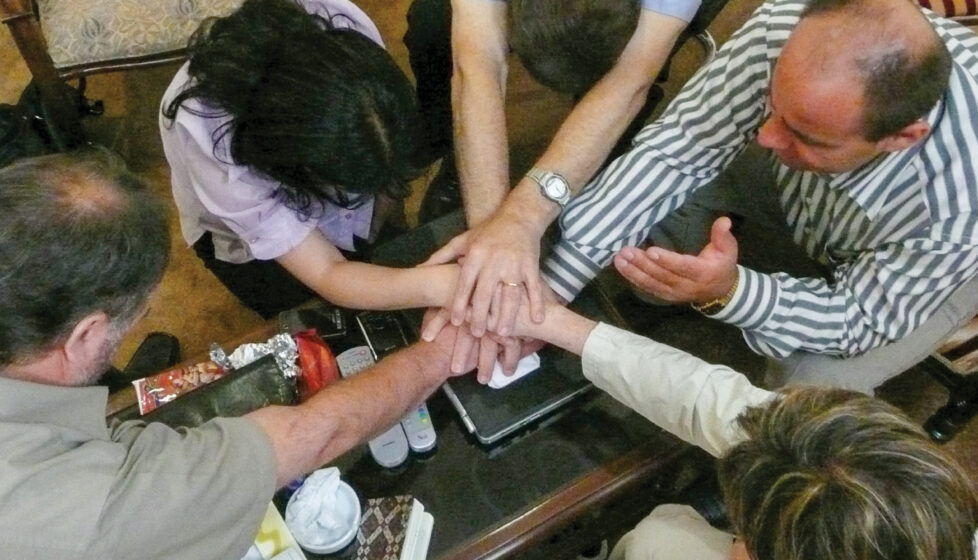 How an encounter with the Bible transformed a militant Iraqi Kurd into a passionate evangelist.

Seventeen-year-old Nemrut devoured books. He was always looking for something new to read, but few books in the Kurdish language were available in his dusty Iraqi town.

One day he spotted something new in a local bookstore — a Kurdish translation of the Gospel of Luke. He wasn’t sure what it was, but he was intrigued. When he asked about the book, he was disappointed to learn that the bookstore owner wouldn’t part with it because it was his only copy. Determined to read the book, Nemrut made a deal with the owner to pay a lending fee so he could borrow the book and return it when he was done. He read until 4 a.m. the next morning. “This was the beginning of loving Jesus,” he said.

Luke’s Gospel had planted a seed, but Nemrut still had much to learn. While he wasn’t particularly committed to Islam, Nemrut had been born into a Muslim family. Like many Kurds, he held that faith lightly, feeling more loyalty to family and tribe than to religion. Zealous for an independent Kurdish homeland, Nemrut joined the Peshmerga forces, an armed group that protects the Kurdish region of Iraq.

Nemrut had watched his people go through a very tough time. The Kurds in Iraq were treated harshly by Saddam Hussein’s regime throughout the 1980s and into 1991. At the end of the Gulf War, protection from the U.S. helped the Kurds establish a semi-autonomous region in northern Iraq; today this area is often referred to as Iraqi Kurdistan.

Although he had returned his rented Gospel of Luke as promised, Nemrut would never be the same after reading it. Even as a Peshmerga soldier, he often brought up the subject of Jesus with anyone who would listen.

Five years would pass before he’d see the book about Jesus again.

“CAN ANYONE BECOME A CHRISTIAN?”

By 1998, Nemrut had decided he should get serious about Islam if he was going to be a member of one of the biggest political parties in Kurdistan. He read through the Quran three times that year, trying to be more devout, but its teachings never seemed right to him. “The Quran was teaching followers about hating others, killing others; I didn’t like this,” he said.

Since he was known to be an avid reader, Nemrut was put in charge of his political party’s bookstore. He purchased a New Testament as soon as he could and added it to the store’s collection.

He read the New Testament in less than a month, beginning in Matthew and taking notes as he read. “When I got to Luke, I thought, ‘This is my old friend, Luke,’” he said. The book resonated with him in a way that the Quran never had. He noted 345 times where the New Testament spoke about love. “I never saw anything about killing others or hating other people,” he added.

Nemrut decided he would devote his life to the New Testament teachings. He tried to apply its lessons to his life, but as a Muslim he still had no idea that he could become a Christian himself. He didn’t know a single Christian. Over the next three years, he read through the New Testament three more times.

He also loaned the book to others, after writing his personal instructions on the cover: “Read this carefully and intentionally. Keep it in purity, and then return it to me.” He told borrowers that since he had read it in a month, he would give them two months to complete the book and return it to him.

In 2001, he finally met a Christian, a man who had come to his city to distribute Bibles, and asked him a pointed question. “Can anyone become a Christian?” Nemrut asked. “I have read the Bible, I know the Bible, but I don’t know if I can become a Christian.” Later, Nemrut realized he had become a Christian the moment he had put his faith in the Jesus he’d read about and begun to follow His teachings.

Nemrut continued to tell his friends about Jesus, and many of them accepted Christ. When the group of believers meeting in his home each week grew to 20 people, a local mullah found out about them. The next Friday, he made an announcement to those attending mosque: “Some people became Christians in our town because of Nemrut,” he said. “Anyone who will drink with them will become an infidel. If you drink water from his house you become an infidel. You shouldn’t speak to them, you shouldn’t greet them and you should cut off relations with them because they became infidels.”

“Then the persecution of believers started,” Nemrut said. “[The Muslims] started to beat their sons and daughters who became Christians.”

Nemrut’s relatives stopped speaking to him, and when they saw him in the street they cursed him. His own sister built a fence between their adjoining properties so Nemrut and his wife no longer had access to a bathroom they shared.

His wife was afraid. “When this started, she wasn’t fully believing in the Lord,” he said. “During this time she was crying … because of all the problems that happened. For me, it was clear that when I made this decision for sure, I was going to face problems.”

Angry Muslims tried to attack Nemrut several times. One Friday after morning prayers, police stopped a mob of about 200 men who were heading toward his house. When the head of security told Nemrut about the thwarted attack, he warned him that the next time he wouldn’t be able to stop the attackers. “Why don’t you stop reading the Bible and speaking to people?” he said.

Some members of Nemrut’s group were beaten by family members at home, causing injuries that still trouble them today, and others returned to Islam because of the pressure. Still, Nemrut sees how God used the persecution to strengthen believers. “The persecution that happened to the brothers and to us made the believers here be more faithful and to have more faith in the Lord,” he said.

Nemrut left the Kurdish political party in 2001. After openly embracing Christ, he didn’t feel like he could remain in the party as a Christian. Since leaving the party cost him his job, he scraped by as a freelance trader, carrying goods in and out of a city on the Iraq–Iran border. Though it was a step down in jobs for him, it ultimately led to Nemrut’s next endeavor.

There were three types of items the government of Iran didn’t want coming into their country: weapons, drugs and Bibles. Nemrut never intended to start trafficking in illegal goods, but the Bible had so dramatically changed his life that he wanted to share it with others. He bought all 35 Farsi Bibles available at the Bible Society and boldly wrote his name and phone number inside each book before sending them into Iran.

When people who had received the Bibles contacted him with questions, Nemrut invited them to meet him in the border city where he lived. He taught them as much as he could about Jesus, preparing them to go back into Iran and share the gospel. Those he taught would often then return, bringing others to learn about Jesus. “My house became a center for Kurdish people from this city and Kurdish people from Iran,” he said.

Because he’d been persecuted himself, he knew what the new believers might face. He told them they might be beaten if they followed Jesus, but it would be no more than Jesus Christ experienced himself.

In addition to his Bible work, Nemrut also led the small church in his hometown. In 2010, he planted another church in a neighboring city.

Others soon became interested in supporting Nemrut’s work and providing more Farsi Bibles. Over 10 years, Nemrut sent about 310,000 copies of the Bible into Iran, until Iranian government surveillance forced him to stop in 2015.

When the self-proclaimed Islamic State (ISIS) invaded nearby Mosul in 2014, the region of Kurdistan became more dangerous, and Christians in Nemrut’s village faced new difficulties. Strangers often appeared in his yard, threatening the family, and he received personal threats on a weekly basis.

Nemrut and his wife were deeply troubled. After praying about it for a while, his wife told him they needed to leave Kurdistan. “You cannot force them to accept Jesus,” she told her husband. Nemrut agreed, but they kept on praying and by morning realized they were wrong. They needed to stay.

Soon after they made the decision to stay in Kurdistan, a Kurdish church in Erbil called and asked if Nemrut would take over as pastor because the current pastor had chosen to leave the country. Though it would be a challenge, Nemrut sensed the Lord’s leading and agreed to pastor the church. The move would also allow his family to live in a safer place, out of the spotlight of their village.

Nemrut pastored the church for about three years, working hard to disciple believers who could one day lead the church themselves. When the time came for Nemrut to move on again, mature believers were able to take over. Today, the Kurdish church in Erbil meets for worship every Friday, Bible teaching on Saturday and prayer every Monday. Every other Friday, Kurdish churches from the surrounding areas join them for worship.

Life isn’t easy for the Kurdish believers. While many Muslim Kurds continue to turn to Christ, the uncertain political situation and lack of jobs have prompted many long-time church members to leave the country. The local government is unsure of how much freedom to give evangelicals, who are viewed as outsiders who don’t conform to traditional religious ideas.

Though challenges remain, Nemrut’s vision to reach the Kurdish people remains intact, and he will continue to share the story of Jesus that he first read in a book by his old friend Luke.