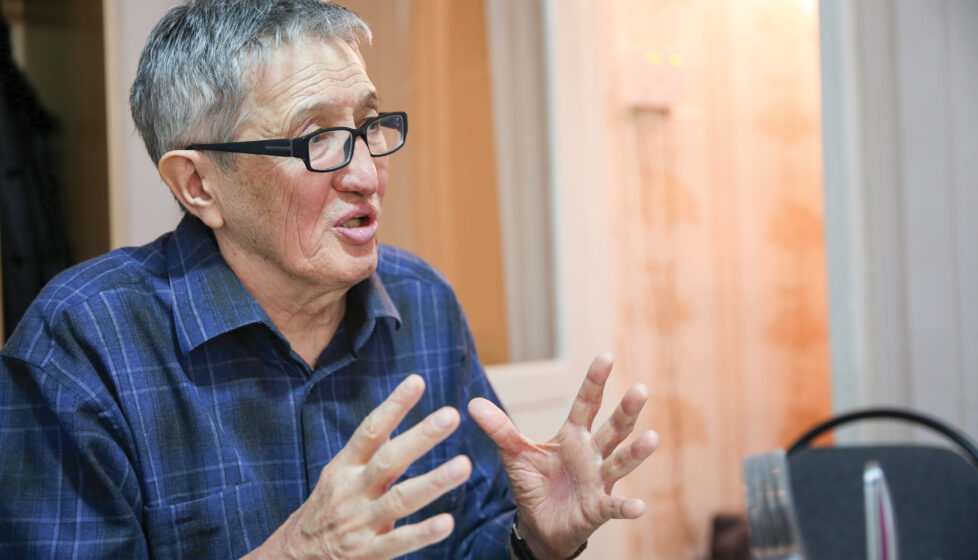 Imprisoned as a threat to the state, Pastor Kashkumbaev had every reason to feel discouraged. But a pointed question from a Christian brother changed his perspective, leading to a powerful work of God in a Kazakhstani prison.

“You will serve 10 years of hard time,” the investigator said solemnly.

The elderly pastor would be almost 80 by the time he completed his sentence, and part of it, he learned, would be spent in a psychiatric ward.

Pastor Bakhytzhan Kashkumbaev knew that prisoners in the psychiatric ward were routinely drugged, causing them to lose the abilities to even think or move. They would drug him to a point of losing his mind.

His heart sank. While he was not afraid to die, he didn’t want his seven grandchildren to see him in that condition. Death didn’t scare him, but losing his mind did.

In May 2013, Pastor Kashkumbaev was arrested after being accused of harming the health of a church member at Grace Church, a legally registered church in Kazakhstan. Authorities filed five charges against the pastor, including a charge of inciting religious hatred.

Although the church member defended the pastor, saying the charges were unfounded, these charges were just the latest in a long series of allegations that had been hurled at the church and its pastor. State officials had previously accused the church of espionage, fraud, money laundering, distributing extremist texts and using hallucinogens during communion. In 2012, officials had raided the church and confiscated computers, DVDs and books that the government considered extremist literature.

Since gaining independence from the former Soviet Union, Kazakhstan and other Central Asian nations have tried to create a unified identity, in part by establishing Islam as the prevailing societal influence. Ethnic Kazakhs are expected to be Muslim.

In 2011, the country adopted laws that required religious groups to re-register with the government. Unregistered religious education and proselytism became illegal, and the activities of registered groups were closely monitored and regulated. Then, in 2012, new regulations were imposed on religious literature, resulting in the arrest and imprisonment of more Christians.

Any form of proselytism or distribution of literature that the government considers “religious extremism” is strictly forbidden. Therefore, churches and Christians who actively witness for Christ are easy targets. And Pastor Kashkumbaev, as a 1995 convert from Islam to Christianity, was an especially notable target.

Pastor Kashkumbaev was filled with dread as the day approached for his transfer from the prison in Astana to the psychiatric ward. But before he left, he received a visit from a good friend and brother in Christ. The pastor, with tears in his eyes, told his friend, “This is probably the last time I will talk to you in my right mind.”

“Where is your faith?” his friend replied.

That simple question was just the encouragement the pastor needed. “I felt like I was under the cover of the risen Lord,” he said. Pastor Kashkumbaev’s outlook on his imprisonment changed completely, enabling him, with God’s help, to lead almost 100 fellow prisoners to Christ during his nine-month imprisonment.

The psychiatric ward was located in an old building that likely housed criminals when Kazakhstan was part of the Soviet Union. The clinic, where the pastor was taken, was located in the basement. A small window offered the only natural light entering the corridor, and the cells were dark. The pastor was given no clothing but a robe before being locked in a cell with violent criminals suffering from psychiatric problems. Some of the prisoners were murderers, including the pastor’s bunkmate, who was convicted of killing his brother but had no memory of it.

One night as Pastor Kashkumbaev slept, he felt a hand grip his throat to strangle him. As he instinctively grabbed the hand and tried to pull it away, he saw the darkness and evil in his bunkmate’s eyes. At the same time, however, he felt at peace. “What do you need?” he asked the man.

Suddenly the man’s appearance and behavior changed. “When are we getting out of here?” he asked.

After climbing out of his bunk, the pastor tucked the man back into his bed and prayed over him.

After the incident with his bunkmate, Pastor Kashkumbaev began thinking of his cellmates as sick children. He had compassion and love for them, he cried and prayed for them, and he did what he could to help them. “They were like flowers planted in dry ground that had withered,” he said. Knowing he might be given mind-altering drugs any day, the pastor took every opportunity to share the gospel with them.

When the day finally came for his first injection, the pastor turned to his cellmates for help. As he began to lose consciousness, he cried out, “I am dying!” The other inmates, who didn’t want to lose him, began calling for the guards. “The old guy is dying!” they yelled.

The guards rushed into the cell and carried the pastor into the hallway. After helping him regain consciousness, the doctor ordered that no more drugs be given to the pastor.

When prison officials ordered him to write down how he had become a Christian, Pastor Kashkumbaev gladly shared his testimony and told them about Jesus. In his prison “confession,” he wrote in detail about what Jesus had done for him. And, being a pastor, he made sure that he included a sermon.

“You are such an interesting character,” she replied. “We don’t sense any evil in you. This isn’t normal.”

The clinic finally called in an independent expert to evaluate Pastor Kashkumbaev. “I don’t understand how you ended up here,” the expert told the pastor. “You are a completely adequate person.”

Authorities decided that the pastor should be returned to the prison in Astana, but before he left the psychiatric ward, he was able to lead several more people to Christ.

A young heroin addict was brought to Pastor Kashkumbaev’s already crowded ward shortly before the pastor returned to Astana. The young man, who had been imprisoned twice before, endured seven sleepless nights as he suffered from withdrawal symptoms.

The pastor shared the gospel with him, even though another inmate told him that someone in the cell was reporting on him. “Only Jesus can help you!” he told the addict while holding his hands. The young man clung to him as if he were drowning.

“Don’t think that no one needs you,” Pastor Kashkumbaev continued after sharing Jeremiah 29:11. “From these words from God Himself, you can see that He needs you. You are needed. God keeps His word. It is as good as done! For Jesus, your addiction is nothing. All you have to do is believe that He can heal you. He is alive; He is risen from the dead to help you, to justify you.”

“What do I need to do?” he asked the pastor.

“We are going to pray together right now,” the pastor replied. “But you have to believe that God hears your every word.” The addict repeated the prayer after the pastor.

After saying the prayer, the young man slept for the first time in a week. Knowing that evening roll call was just an hour away, the pastor prayed that he might somehow be allowed to continue sleeping.

When the officers finally came for roll call, Pastor Kashkumbaev stood between them and the bunk of his sleeping friend. “Why is he sleeping?” an officer asked the pastor. “He should be standing during the roll call.”

“He has not slept the entire week,” he quietly explained to the officer. “He asked me to pray for him. God gave him this sleep that he needs desperately.”

The officer ordered the pastor to wake him up. “Who gave you the right to break procedure?” the officer demanded.

The pastor stood firm. “I am not going to let you wake him up,” he told him. “You can put me in solitary confinement. Do anything to me.”

The officers were shocked. “You seem to be a normal person. Why are you trying to break the rules?”

“I am not trying to break the rules,” he told them. “I am just asking you to be humane. You are checking to see if we are all here, whether we are all alive. Look, he is alive. But he is sleeping and he needs his sleep so he can heal.”

After receiving the pastor’s assurance that he would never ask something like that again, the officers finally agreed to leave him alone.

When the young man awoke 20 hours later, the pastor prepared tea and something for him to eat. “Do you remember that you asked Jesus to come into your heart?” he asked him.

The pastor then taught him how to pray.

“You are now a member of God’s family,” he told him. “You are a new creation, and you have to view yourself as a new creature.

“You are not addicted to any drug,” he continued, knowing that drugs were freely sold in the prison, even by the guards. “Satan will try to attack you, but you have to remember that you are not addicted. You can say no.”

Pastor Kashkumbaev taught and encouraged the young man for four days before being transferred to another cell. As he was leaving, the former drug addict began to cry. “What am I going to do without you?” he asked.

“Are you alone?” the pastor replied. “Who is in you? Hold onto Jesus; you are not alone, you will do fine.”

Pastor Kashkumbaev was released from prison in February 2014, and four of the five charges against him were dropped. Although he was allowed to return home, he remains under house arrest and must check in with police once every two months. He continues to minister to his congregation.

The Voice of the Martyrs encouraged readers to write to Pastor Kashkumbaev while he was in prison, and almost 700 letters were sent to him through VOM’s prisoneralert.com website. Unfortunately, the pastor did not receive the letters. Prison officials in Kazakhstan neither distribute letters nor tell prisoners that they have received letters.

The pastor said he does not regret his time in prison. “In prison the Holy Spirit opened one dimension of prayer [to me],” he said. “We need to pray the same prayer for both friends and enemies: Pray that they will know God and sincerely love Him and Jesus Christ, whom He sent, His only begotten Son.”

Get more stories like Elderly Kasahk Pastor Imprisoned, Shares Christ with Inmates with a subscription to VOM's Award Winning Magazine