Vietnam has a repressive Communist government that actively restricts Christian worship in many ways. While Christian worship is legal, the government views Christians and churches as a threat to its power and control. Minority tribal groups, such as the Hmong, generally face the most violent and harsh forms of persecution, while Christians in urban centers experience pressure and harassment instead of violent opposition. Churches continue to grow as believers faithfully reach out despite these challenges.

Most Vietnamese people practice a blend of ancestor worship and Buddhism. Only 2.5 percent of the population are evangelical Christians. 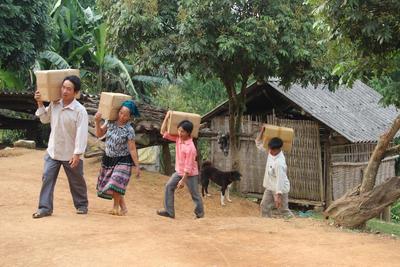 New Christians in tribal areas are often evicted from their homes and villages by local authorities. Officially recognized churches are harassed by the government and are expected to report their activities and teachings to the government. All churches face government opposition when they evangelize and attempt to conduct community events. Within rural and tribal areas, believers can often meet openly, but Christian converts are targeted for harsh persecution. Christians are denied social services, utilities and access to schools.

It is legal to own a Bible, but distribution is difficult in rural areas. Give Bibles

VOM responds to persecution and provides training for pastors and believers. We also distribute Bibles to tribal Christians and provide ministry tools for front-line workers. Give to VOMâs Global Ministry