Located on the Red Sea, Eritrea is governed by a totalitarian regime that seeks to control every aspect of life. Some have compared Eritrea to the âhermit kingdomâ of North Korea, as it is one of the most secretive and isolated countries in the world. In 2002, the government outlawed every form of religion except Islam, Orthodox Christianity, Roman Catholicism and the Lutheran Church. All other religious groups are illegal, and the government maintains tight control of approved churches, including their messages. Years of communism, required military service and economic depression have caused many Eritreans, including evangelical believers, to flee the country. But during the recent war in Ethiopiaâs Tigray region, the Eritrean army was allowed to cross the border and destroy two Eritrean refugee camps, taking many refugees, including Christians, back to Eritrea. In the past few years, the government has released some Christian prisoners while arresting several new groups. While the 2018 peace agreement between Eritrea and Ethiopia ended a two-decade war, the benefits have been one-sided. Ethiopians may travel freely between the two countries, but travel for Eritreans is restricted by their government. Despite these hardships, the body of Christ in Eritrea continues to grow due to the faithfulness of church leaders inside and outside the country.

The population is nearly evenly divided between Sunni Muslims and Orthodox Christians. Only about 3 percent are evangelical Christians. 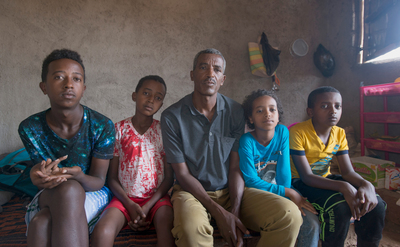 Evangelical churches must meet secretly. The government actively seeks to infiltrate these underground churches and imprison their leaders. About 400 believers are known to remain in prison, including several top leaders. Imprisoned Christians are not given a trial or allowed to see their families, many of whom do not know where their loved ones are imprisoned or even if they are still alive. Christians simply disappear and are assumed to be in government prisons. The conditions inside these âprisonsâ are some of the harshest in the world. Christian prisoners are provided meager rations and held in shipping containers in extreme desert conditions for years. When long-term prisoners are released, they are blacklisted by the government. They are unable to get jobs, are watched constantly and their families lose opportunities. They still need extended physical and emotional help.

Bibles are available, but the government tracks each Bible sold. Christian literature is highly regulated, and most believers who want Bibles must smuggle them in. For this reason, many believers must access Scripture by digital means. Give Bibles

VOM supports Christian prisoners and their families. We provide Bibles and Christian literature to believers inside Eritrea. Give to VOMâs Global Ministry