Christians have suffered greatly from the civil war that began in 2012. They are targeted and attacked by Muslim rebels and their sympathizers who accuse them of assisting militias that have carried out revenge killings against Muslims. Christians are among the most vulnerable in the countryâs conflict, at times being driven from their towns and villages as attackers loot and destroy their homes and churches. Yet churches are often the only ones caring for the hundreds of thousands who have been displaced in the conflict. While the CARâs civil war has presented opportunities for the church to display Christâs love to a ravaged nation, indigenous churches need support from the larger body of Christ.

70 percent of the population identifies as Christian, including 30 percent evangelical Christians. The remainder of the populace are predominantly Sunni Muslims, though many who name themselves either Muslim or Christian continue to practice animistic tribal beliefs.

Christians who actively share their faith suffer intense violence at the hands of Muslim rebels. 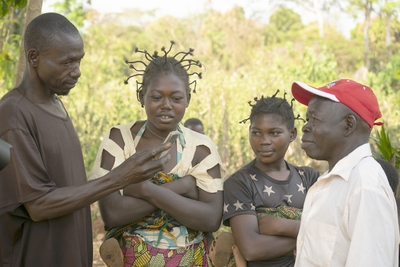 What It Means To Follow Christ In Central African Republic:

Because of the civil war between rebel groups that publicly identify themselves as âMuslimâ or âChristian,â some have struggled to distinguish between political violence and religious persecution. However, attacks targeting churches, Christian families and pastors because of their Christian witness and other activities of biblical faith have become common. In a four-week period in 2017, five pastors were murdered by Islamist Seleka rebels in targeted attacks to eliminate their witness for Christ.

Bibles are routinely destroyed by Islamist rebels. While they can be purchased in the capital, most people cannot afford them. Give Bibles

VOM is serving more than 45,000 Christians who have been driven from their homes and villages. Give to VOMâs Global Ministry