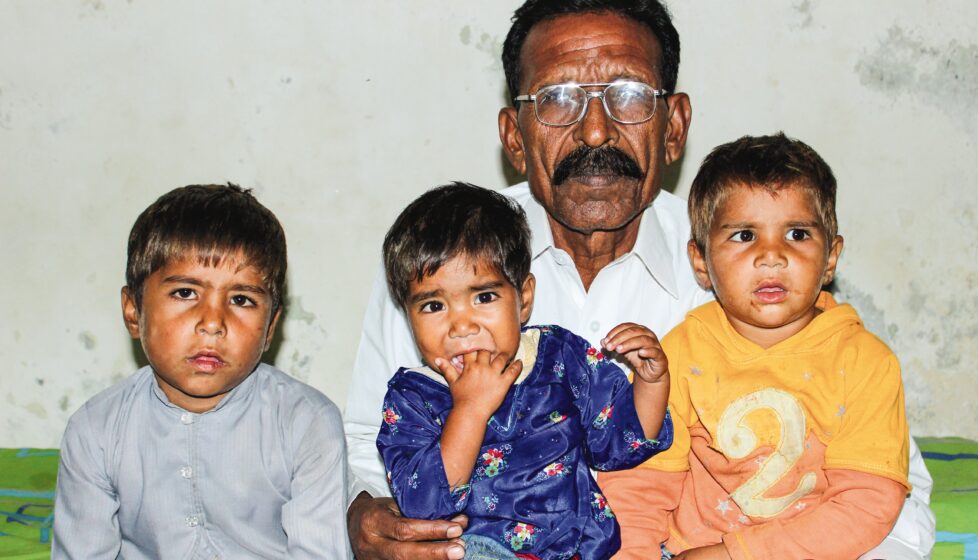 The terrified couple clung to each other inside their one-room home while the mob of angry Muslims outside shouted insults and threats: “They have burned the Holy Quran! We will teach them a lesson!” Shama cried as her husband, Shahzad, tightened his arms around her and began to pray.

At 6 a.m., more than 500 Muslims had gathered outside the young couple’s home near the brick kiln where they worked as bonded laborers. Shama’s husband couldn’t believe the events of the last few months had come to this.

Shahzad, his father and four brothers moved to the brick kiln near Kot Radha Kishan, Pakistan, in 2000, when Shahzad was 16. As poor Christians (Pakistan’s lowest social class), they had few employment options. While the work in a brick kiln was grueling, it at least provided them food and a place to sleep. However, as often occurs with poor Christians in Pakistan, the family soon became indebted to the brick kiln owner. The debts are eventually passed on to the children, indenturing many families for life.

Although Shahzad’s family was Christian, his father, Nazar, became friends with Muslims living near the kiln. He often read the Quran with them and even practiced some Muslim rituals, so many locals assumed he had converted to Islam.

In 2006, Shahzad married Shama, a dedicated Christian. Shama loved the Lord and even painted a bright white cross on the door of their rented room at the brick kiln. They prayed together morning and evening and met for prayer twice a month with the other 10 Christian families working at the kiln.

Shama was disturbed that her father-in-law, Nazar, practiced Muslim rituals, and she asked him many times to stop. “We are sons and daughters of God,” she told him. “Jesus is our Savior; we believe only on Him. Give up this work, and pray to the Lord for forgiveness.” She and Shahzad prayed for Nazar regularly, and finally, in 2013, he stopped the Muslim rituals. He joined his son and daughter-in-law for daily prayers and told everyone of his love for Jesus Christ.

The change in Nazar did not go unnoticed in the community, and some thought Shama had converted Nazar from Islam to Christianity. Many at the kiln, including the owner and his clerk, already resented Shama because she did not work in the kiln. Shahzad would not let her because he was afraid the men would take advantage of her.

In October 2014, Nazar became very ill. Shahzad and his brothers couldn’t afford treatment, so they asked the kiln owner for a loan. He refused. Having no other choice, Shahzad and his brothers took their sick father to a government hospital in Lahore, where he could be treated for free. Shahzad missed several days of work, and his father died at the end of October. When Shahzad returned home, the kiln owner and clerk beat Shahzad severely for missing work.

He and Shama decided they could no longer live at the kiln. “Tell us how much money we owe you,” they told the kiln owner. “We will return it and leave your brick kiln.”

The owner and clerk didn’t want the Christian couple to go free, so they devised a plan. They knew that accusing them of desecrating a Quran would get them beaten, jailed under Pakistan’s blasphemy laws or worse.

At 5:30 a.m. on Nov. 4, the clerk and a few Muslim men from the kiln went to the leader of the local mosque and told him that the Christian couple had burned a Quran. The mosque leader then announced the offense to the village over loudspeaker, and a mob immediately began to surround Shahzad and Shama’s home.

The terrified couple locked their door as the crowd shouted for their deaths and banged against the door. Soon, members of the mob climbed onto the thatch roof of Shahzad’s house, tore a hole in it and dropped into the room to unlock the door. They dragged the couple out of the house and began to beat them. Then they took them to the office of the brick kiln clerk, where the owner and clerk beat them again. Shahzad and Shama pleaded for their lives, but the beating continued even though Shama was pregnant with their fourth child.

After beating the couple so badly that their legs were broken, the enraged Muslims tied them behind a tractor and dragged them around the kiln yard for more than 30 minutes. The crowd jeered, and Shahzad’s family members watched in horror. All the while, messages of hate droned from the mosque loudspeaker as the leader announced that the Christian couple must be taught a lesson.

When the tractor driver saw that Shahzad and Shama were unconscious, he turned toward the brick kiln ovens. The mob then stuffed their bodies into vent holes above the oven. Autopsy reports would later show that both of them burned to death, having been alive when stuffed into the vents. The attack lasted four hours.

No Evidence of Quran Burning

Although local police were present during the attack, they did nothing to stop it. However, they did later arrest 76 people in connection with the murders, and they registered a case against more than 400 people involved. All of those arrested were denied bail and are being held until trial, including the brick kiln owner and clerk.

The police also noted that there was no evidence that Shama or Shahzad had burned any part of a Quran. Muslim politicians, including the area’s Member of Parliament, strongly condemned the murders.

Tired of recurring violence against Christians and inadequate government response, some Pakistanis have called for change to the country’s infamous blasphemy laws, under which Christians are often persecuted by anyone with a grievance against them.

In this case, the Pakistani government promised to provide financially for the couple’s children and relatives, and it has. Shahzad and Shama’s three children, who were all younger than 6 at the time their parents were killed, are living with their grandfather in another village. VOM workers continue to visit and check in on them.

VOM has also helped the other Christian families who worked at the brick kiln. After the owner’s arrest, the kiln was closed and sealed, leaving the Christians without an income. They had fled during the attack, leaving everything they owned behind. At Christmas time, VOM workers brought them food, blankets and clothing.

When VOM workers asked the families what they needed most, they didn’t ask for financial support but instead asked for rickshaws, which would enable them to support their families by starting a small business. In February 2015, VOM provided each family with a motorcycle rickshaw.

Pakistani Christians Murdered By Mob of Over 500 Muslims
Categories: Stories from the Field
Tags: Pakistan