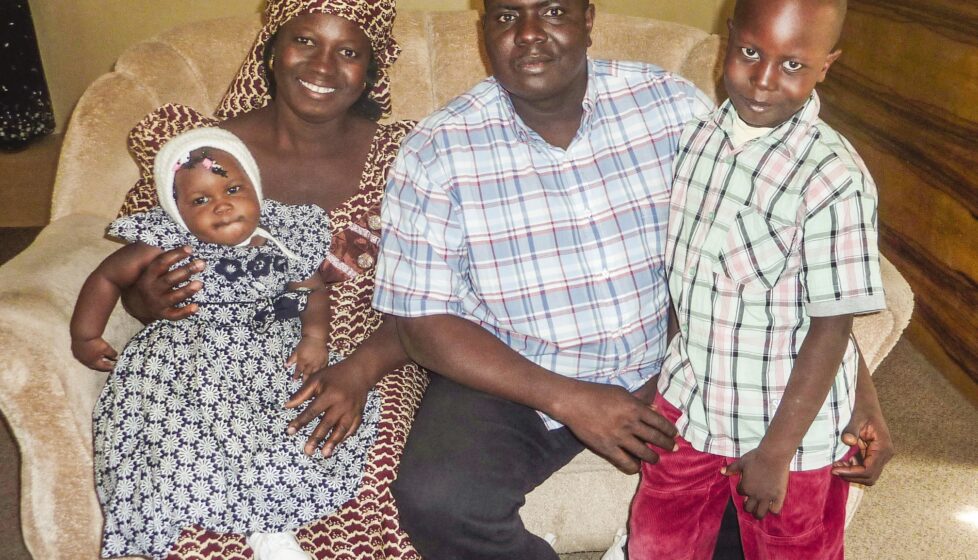 Habila Adamu and his family were awakened by the sound of someone pounding on the front door of their simple home in northern Nigeria. It was 11 p.m., well past the hour for a neighborly visit, so the only reason for someone to be at the door was an emergency or, worse, an attack on their village.

The pounding on the door was followed by the sound of men yelling for Habila to come out with his family.

Habila rushed to get dressed. When he entered the front room with his wife, Vivian, and their young son close behind, he faced intruders wearing robes and masks. One was armed with an AK-47. Habila said a short prayer to the Lord.

After announcing that they were there to do the work of Allah, the men began to question Habila. They asked him his name, his profession, whether he was a policeman or in the military, and whether he was a Christian or Muslim.

“I am a Christian,” he replied.

Vivian was terrified, knowing the men were members of Boko Haram.

The intruders told Habila that they were giving him the opportunity to live — and live a better life — if he would only become a Muslim and say the shahada [Islamic profession of faith that includes, “There is no god but Allah, and Muhammad is his messenger”]. They even asked him to join them as a member of Boko Haram.

All the while, Habila was prepared to die. “I am a Christian and will always remain a Christian,” he replied, “even to death.”

Turning to Vivian, one of the men said, “If your husband does not cooperate with us, you will watch him die.”

Believing that her husband’s death was imminent, Vivian cried with fear and grief.

The intruders repeated their offer to Habila, and he again refused.

“Your husband is stubborn,” the men told Vivian. They asked her why she couldn’t convince him to deny Christ and live a good life.

“Don’t worry,” Habila told his wife as the rifle was aimed at his head. “The death of a Christian is a great gain, not a loss.”

The men looked back at Vivian and demanded that she bring them all the money they had. She scoured the rooms of their small home, grabbing anything of value that she could find in hope that the men would be satisfied and spare her husband’s life. But it wasn’t enough.

The man with the AK-47 placed the barrel next to Habila’s mouth. “Since you refuse to become a Muslim,” he said, “here is your reward!” Then he pulled the trigger.

Habila fell to the floor as blood streamed from his face. Vivian cried out in horror.

“Shut up, woman!” yelled one of the attackers. “If you try to get help, we will find you and kill you and your child.” The men kicked Habila’s leg to make sure he was dead. Satisfied that they had done Allah a service, they chanted, “Allahu Akbar [Allah is great]!” and then left the house.

Minutes passed, and the pool of blood expanded around Habila’s body. As Vivian cried over her husband, she heard him gasp, “I am still alive. Please get help.”

Her heart filled with hope as she rose quickly from the floor. She struggled to open the door of the fence in their yard before realizing the attackers had locked it. She finally managed to leave the house and run to her neighbor’s home. The neighbors called the police for help, but they never arrived. Habila didn’t get to a hospital until 6 a.m. the next morning.

During that attack in November 2012, Boko Haram raided the homes of more than 30 members of Habila’s church. All of them refused to convert to Islam, choosing to die rather than turn their backs on Christ. Habila and his family were the only survivors.

Habila was transferred to several hospitals in an attempt to get him the medical attention he needed. When his medical records were later reviewed, a medical worker said that it was only by God’s grace that he survived.

Habila was scheduled to undergo a bone graft to repair his cheekbone, which was destroyed by the bullet. But before doctors began the operation, they were shocked to see that his cheekbone had healed. There was no need for the graft.

Even after the attack, Habila continues to share his testimony with others. When a VOM worker asked him how he feels about those who shot him, he said, “We are condemned criminals. … Christ died for us. … He loves us. That’s why we must show that love to the people that hate us. Since that day, I pray to God, ‘God, forgive them. God, forgive them.’ My prayer is that [they will know the truth and] be saved, not to be condemned. I love them. … Even if I have the opportunity to see them, I will hug them and I will pray for them.”

When asked how he could forgive the men who tried to kill him, Habila replied, “Because Christ is love. The God I am serving is love. … He commands us to love each other.”

Habila refused to deny Christ when faced with death. Others succumb to the pressure out of fear, but God is also able to redeem them.

Get more stories like Nigerian Christian Shot in Face by Boko Haram, Survives Attack with a subscription to VOM's Award Winning Magazine