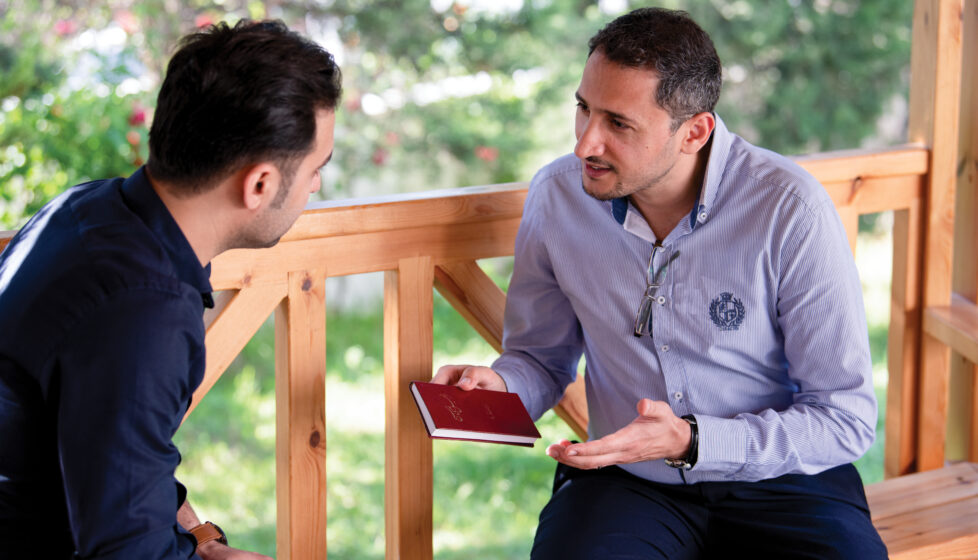 When 36-year-old Reza placed his faith in Christ 12 years ago, after comparing the Jesus of the Bible with the Jesus he had read about in the Quran, he began to live out his new faith with abandon.

He worked with other Christians to get God’s Word into the hands of Muslims throughout Iran, which decades earlier had adopted Shiite Islam as its official state religion. And he and a friend even duplicated and distributed thousands of CDs and DVDs containing the gospel message.

Reza wanted to lead people to Jesus and help build God’s kingdom, but his motives became increasingly confused. He grew more concerned with the number of people he was reaching than the people themselves.

Then, one day, he was arrested and imprisoned for his evangelism. “When I look at that now, I am grateful to the Lord for going through that because it really built my Christian character,” Reza said. “I knew there were so many things in my Christian theology that needed to be fixed. I think God used that point to fix that.”

One summer day in 2011, Reza and a Christian friend rode a motorcycle through a cluster of unreached villages in northwestern Iran, distributing New Testaments to anyone willing to accept them. Suddenly, members of Iran’s secret police began chasing them in an unmarked car. As Reza’s friend sped up to about 60 mph, he hit a rock, launching the two evangelists into the air.

The plainclothes officers ran toward the two battered and bloodied men lying on the ground, but they weren’t coming to help. Two officers stood Reza up only to kick his broken left foot and watch him fall again. Their brutality sent a clear message: No more evangelism.

Reza and his friend were taken to an interrogation center, where they were accused of being spies for the United States, the United Kingdom and Israel. One night in prison turned into many nights, with no end in sight.

Sore, hungry and increasingly concerned about the occasional tortured moans he heard from nearby cells, Reza’s mind began to race. What would happen next? What answers could he give that would not put other believers’ lives in danger? All he could do was pray. Slowly, he felt God change his heart.

During his time in prison, Reza realized he had not fully placed his hope in Christ. He began to see how often he had missed that target.

“That was the biggest experience I got from that,” Reza said. “As Christians, we can build things without having our hope in heaven. We sometimes just want to see results in this world. Usually, that destroys us and the people around us.”

He also learned how to obey the frequently repeated biblical command to “not be afraid.”

“There is a great fear when you go through this, and the Lord shows you, ‘If you are with Me, you must not have any fear.’ That is my experience. I love that. I am grateful for that experience.”

The third lesson he learned is what real love is. While in prison, he asked himself whether he loved people outside the church just as he loved his brothers and sisters in Christ. Then he asked himself if he truly loved those who were seeking to tear him down by putting him in prison.

“Jesus speaks about loving others,” he said. “I’ve preached that to people, but when you go through this experience, you have to practice that. It becomes real for you, and then you can understand.”

After 40 days in prison, Reza’s father posted bail, and he was temporarily released. As he left his cell, he took with him the lessons God had taught him — along with a dream.

Two weeks after Reza’s release on bail, his friends arranged to help him escape to Turkey. Figuring he had 24 hours before being rearrested, he fled toward the border on his still-fragile left foot. When he arrived at the section of the Iran-Armenia border he needed to cross to reach Turkey, it was closed.

While thinking about what to do next, Reza remembered a dream from his time in prison in which God called him to build a ministry for Iranians as close to Iran as possible. Realizing the dream could have actually come from God, he decided to travel toward the Central Asian country in his dream.

After moving to the new country, Iranian authorities continued to intimidate Reza, once sending him a note that said, “We will kill you. You are not very far from us. This is a small country and not a strong country. We can do anything there, you know.”

Though he also receives death threats from the local Muslim community, Reza now enjoys a level of freedom he had never experienced as a Christian in Iran. He has even managed to start a church in the heart of the Muslim community.

Reza, now married and the father of a young daughter, has gained citizenship in his new country. Although he has never returned to Iran, he continues to support a network of churches there and works to spread the gospel inside the country. “The best thing I can give to my nation is the salvation in Jesus Christ,” he said. “That is the only thing that can set a nation free.”

In addition, he has started a training center for Iranian house church leaders and a rehabilitation center for Iranian drug addicts in his new country. He has also helped start discipleship and outreach programs in neighboring countries of Iran. VOM helps support this work.

Reza is constantly amazed by God’s providence. By basing his ministry in a nearby country, as suggested in his dream, Reza can easily send missionaries into Iran. He said there continues to be a deep hunger for the gospel in Iran, something he is not seeing where he lives now. His biggest prayer is that new believers will have opportunities to grow deeper in their faith.

“The Iranian church is growing, but we have less discipleship,” he said. “We need to pray that we can make more disciples out of these new believers coming to faith.” He added that there are many pastors, both inside and outside of Iran, who are willing to sacrifice their lives for the sake of the gospel.

“They are willing to do whatever for God’s calling,” he said. Sharing the gospel in Iran is incredibly risky. Christians who share Jesus are aware the government uses a network of spies to prevent evangelism. They also know Muslim family members, friends and neighbors could report them to authorities at any time. However, they also understand that the Scriptures tell us to expect persecution.

Reza recognizes persecution as part of God’s plan, and he expects to continue facing opposition as he helps mobilize evangelists in Iran. But after learning in prison to place his hope fully in Jesus, to live without fear and to truly love Muslims, he is confident that he can endure whatever persecution comes his way.

Get more stories like Iranian Bible Distributor Imprisoned, Dreams of New Ministry with a subscription to VOM's Award Winning Magazine