North Korea was once a thriving center of Christian worship. Pyongyang, the capital, was known as âthe Jerusalem of the Eastâ in the early 1900s because of its 2,000Â­plus churches. But decades of rule by an oppressive regime, currently led by Kim Jong Un, has forced Christians to worship in underground settings. The communist-inspired dictatorship is founded upon Juche, a distinctly North Korean religious ideology that requires worship and subservience to the Kim family. Christianity is considered subversive and is brutally opposed. Anyone discovered to be a Christian or to express any interest in Christ or the Bible is considered an enemy of the state. The gospel is still proclaimed in North Korea through various creative means, including shortwave radio and bold evangelists who risk their lives to smuggle Bibles and discipleship resources into the country.

The North Korean government allows for no religious freedom, requiring all North Koreans to follow the Juche religion.

If discovered, Christians face harsh persecution from the government and from members of the community, who are required to serve as government informants. Even those who are aware of Christian activity but do not report it to the government are punished as enemies of the regime. 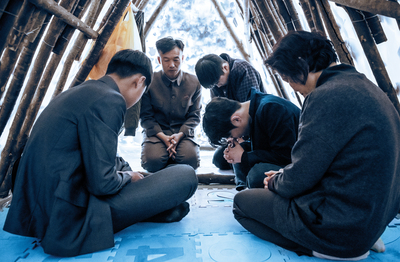 What It Means To Follow Christ In North Korea:

Christians are sent to prison and labor camps, where they are starved, overworked and tortured. The governmentâs requirement that all North Koreans act as informants applies even to families, as children are taught to spy on their parents from a young age. Therefore, North Korean Christians must be extremely careful in what they say, what they do and even how they pray. When a Christian is discovered, the government punishes the entire family in order to incentivize reporting. Despite the threat of persecution and heavy social pressure, Christians in North Korea hold firmly to their faith. Christian and secular analysts estimate that about 30,000 Christians are currently suffering in prison and labor camps.

Owning a Bible or even portions of Scripture is extremely risky in North Korea. Nevertheless, bold Christians work to bring Godâs Word to the North Korean people, few of whom have ever had access to Scripture because of the regimeâs unceasing efforts to restrict access. Most of North Koreaâs underground Christians have found that memorization is the safest and most effective way to keep Godâs Word. Give Bibles

VOM provides Bibles via creative smuggling operations, broadcasts the gospel over a special radio network and ministers to North Koreans wherever they are found. Give to VOMâs Global Ministry