Mozambique is located along the southeastern coast of Africa. It was colonized by the Portuguese in the 1500s and retains Portuguese as its official language. After gaining independence in 1975, Mozambique became a communist one-party state backed by the Soviet Union. It suffered a protracted and devastating civil war from 1977 to 1992 that resulted in a governing presidential democracy, but the war devastated the countryâs economy and infrastructure. Today, Mozambique is among the poorest and most dangerous countries in the world. While the country is majority Christian, the northern provinces are predominantly Muslim. One of these provinces, Cabo Del Gado, has endured an Islamic insurgency that began five years ago with attacks on police stations and government buildings. In 2019, when the insurgents pledged allegiance to the self-proclaimed Islamic State (ISIS) in Africa, the attacks intensified. The Islamists targeted villages and overran entire towns, eventually controlling most of Cabo Del Gado. In 2021, Rwanda and other countries in southern Africa deployed thousands of troops to the province. They have retaken many large cities, but small-scale attacks still occur. More than 700,000 people are still displaced from their homes in Cabo Del Gado province.

The country is majority Christian, including 13 percent evangelical. About 25 percent hold to traditional ethnic beliefs, and 17 percent are Muslim.

Islamic extremists persecute Christians in the north, while believers face social and community-wide persecution in other Muslim-majority areas. 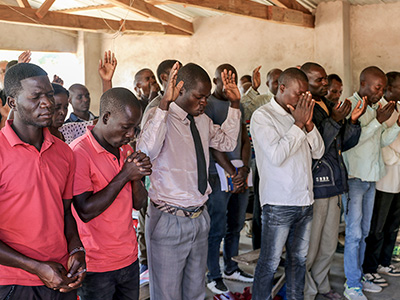 Christians in the north, especially pastors, have suffered greatly, and the insurgency has also affected many nominal Muslims. In smaller attacks on rural villages, extremists often separate Christians from other villagers, persecuting the Christians and their children through extremely inhumane and violent methods. All churches and Christiansâ homes are typically destroyed. The believers who flee these attacks are dispersed throughout Mozambique, and many know nothing about the welfare of their family members. Christian converts in other Muslim-majority regions face intense communal persecution and are ostracized from their families after they convert to Christianity.

Bibles are available but are hard to find in some areas and in some dialects. Since many tribal groups are illiterate, audio Bibles in their dialects are highly sought after. Give Bibles

VOM supports Christians who have been targeted in the Cabo Del Gado insurgency, providing general relief as well as rebuilding homes and churches for pastors in the region. Working with local Christians, VOM also helps provide audio Bibles to Christians, churches and ministries working in the area. Give to VOMâs Global Ministry