The Communist government, in conjunction with Buddhist monks, persecutes Christians, with the exception of the government-controlled Lao Evangelical Church. Poverty, lack of infrastructure and mountainous terrain make evangelistic outreach challenging. Thanks to bold evangelists, churches continue to grow even as they experience ongoing persecution.

60 percent of Laotians consider themselves to be Buddhists, but most practice a syncretistic version of Buddhism mixed with tribal animism. 4 percent are Christians, including 3 percent evangelicals.

Most believers are persecuted by family members or village authorities concerned that Christians offend the spirits, and the central government restricts Christian activity. 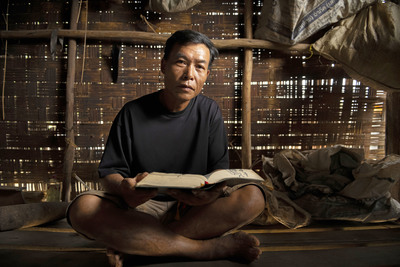 Some in Laos, particularly those in government leadership, view Christianity as a foreign religion and a tool used by the West to undermine the Communist Laotian regime. There are many house churches and some church buildings, but the vast majority do not have a trained pastor. Laotian authorities sometimes arrest Christians and detain them for up to a week in attempts to control Christian activity. Christians are commonly denied medical treatment as well as educational and other social services.

Bibles are not sold in bookstores. Government-sanctioned churches sell Bibles, and other organizations are able to bring Bibles in with legal permission. But the government restricts and opposes Bible and Christian literature distribution of any significant size. Give Bibles