Despite the change in leadership in 2018, churches in Cuba face unrelenting pressure from the government, which remains committed to communismâs atheistic ideology and sees churches as a threat to the revolution begun by Che Guevara and Fidel Castro in the 1950s. Cubans remain poor, with the government seeking to control every aspect of life. When church leaders resist state teachings that are contrary to Godâs Word and disobey government restrictions on Christian witness, they are called in for interrogation. Although gathering in unregistered churches and constructing new church buildings are banned, many churches boldly worship despite the risks.

Most Cubans are atheists. A significant number of Cubans engage in superstitious and spiritist practices, including the Afro-Cuban religion of Santeria. 11 percent are evangelical Christians. 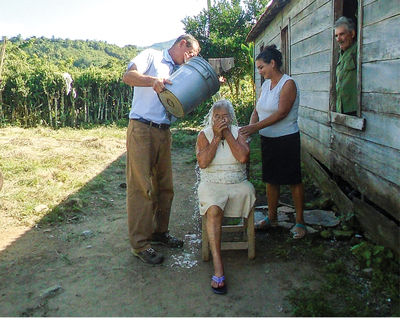 Unlike the overt violence Christians faced during the communist revolution, more subtle methods of persecution are now used by the Cuban government, largely out of concern for its global reputation. Christian leaders are often summoned by government officials for questioning or held for up to 48 hours to pressure them, and churches are demolished by hired gangs so the government can deny responsibility. Legal church buildings are seized, and no new church buildings have been legally built in the country since the revolution. Many believers meet in illegal house churches, often extensions of the pastorâs home or shaded structures in the backyard of a familyâs home. Churches continue to grow through active evangelistic activity, but some believers have never owned a Bible because of government oppression. Though no Christians are known to be imprisoned in Cuba, many are closely watched so that they are effectively under house arrest. In addition, Christians are often denied jobs and educational opportunities.

Though great strides have been made in Bible distribution, access remains restricted. In 2017, Cuba allowed the purchase and sale of Bibles only to members of the ecumenical Protestant church organization, but most Christian literature remains illegal. There are no Christian bookstores in Cuba. There is a shortage of Bibles, which even when available can cost a third of a workerâs monthly income. Give Bibles

VOM distributes Bibles and supports discipleship and evangelism. Give to VOMâs Global Ministry