As a former Soviet republic on the Caspian Sea, Azerbaijanâs churches developed in the wake of the Soviet Unionâs dissolution. Although Azerbaijan is rich in oil and gas reserves, corruption and the countryâs authoritarian government have impeded economic growth. Nevertheless, poverty has been reduced and the countryâs infrastructure is gradually improving.

85 percent of Azerbaijanis are Shiite Muslims and 2 percent are Christians.

Families are the main persecutors of Christians. Azerbaijan has a shame-honor culture in which those who leave Islam are considered to have brought shame on the family. The government also pressures Christians with heavy fines. 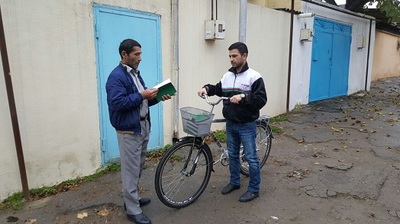 For many years now, churches have been denied the ability to register legally. Secret police attend and sometimes raid church meetings, which the government classifies as illegal. In 2015, the government published a list of banned religious books that included the Old Testament. Those caught with banned religious literature are fined. The government is tightening restrictions and often asks church leaders to submit lists of membersâ names. Some pastors and leaders feel this is an attempt to gather information for later use against church members or pastors. Many Christians faithfully share Christ with neighbors and family members despite legal pressure and possible fines.

Bibles are difficult to obtain. Churches can purchase them, but they cannot be printed legally. Give Bibles

VOM brings Bibles, including childrenâs Bibles, into the country and provides legal assistance to persecuted pastors and churches. Give to VOMâs Global Ministry