The Berber people of Algeria are the countryâs original inhabitants. Today, they live mainly in Algeriaâs mountainous Kabylie area in the north, while Arabs inhabit the rest of the country. Christian faith has a long history in North Africa, especially among ethnic Berbers. The early church father Augustine of Hippo was believed to have been a Berber from Algeria. However, after invasions by Arab Muslims, much of Algeriaâs public Christian worship and witness have disappeared. Today, many Berbers in Algeria are rediscovering their Christian heritage. The church has been growing rapidly, and Algeria is home to one of the largest church congregations composed solely of Christian converts from Islam. Algerian Christians are reaching out boldly to their Muslim countrymen, which has increased persecution. The political situation is also uncertain, as the president was dismissed recently and several high-level individuals were arrested for corruption.

The government actively persecutes those who leave Islam. In addition, society creates hardships for Christian converts, and Muslims persecute their own family members who become Christians. 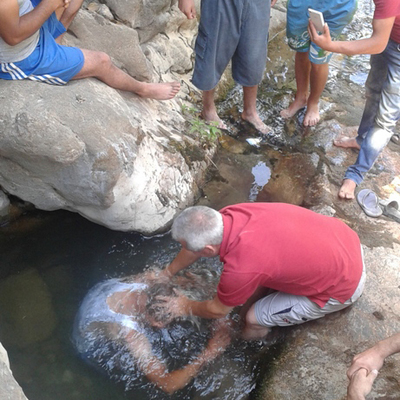 Algeria is a shining example of a growing church in North Africa. It is also a leader in the region for theological training and church development. Nearly all of the church growth has occurred within the Berber community. Churches are allowed to meet freely in buildings, but in 2018 the government temporarily closed many church buildings and harassed congregations. Berber Christians, who are watched carefully, have gained a collective voice by joining under the umbrella of the Evangelical Protestant Association. Although sharing the gospel with Arabs can cause serious problems, Berber Christians continue to share the gospel boldly in and around al-Qaida camps in the country. Secret communities of Arab Christians exist throughout the country. It is not common for Christians to be imprisoned, but one believer was imprisoned for nearly a year in connection with a social media post. He received a presidential pardon in July 2017.

There is a Bible Society in Algeria, but the printing and importation of Bibles is carefully monitored, limited and controlled by the government. Bible distributions are risky for the distributors and congregations involved. Bibles are often confiscated by government officials. Give Bibles

VOM supports safe houses for believers expelled from their homes, literature printing and distribution, and front-line workers who reach out to Muslims. Give to VOMâs Global Ministry