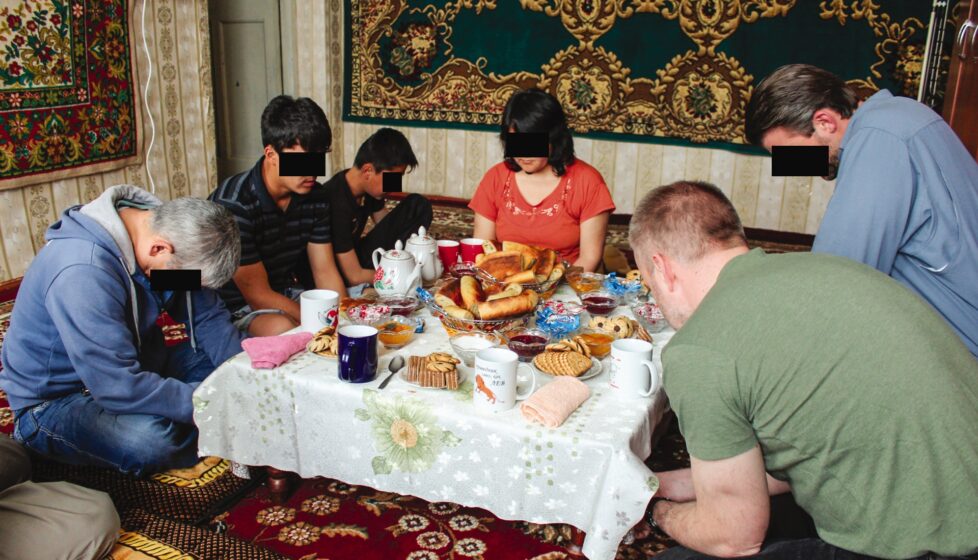 Laila’s husband was away, and she was left to care for their two children alone. It was a cold winter in Central Asia, and her landlords had just kicked her out. “If you don’t leave, we’ll burn the house — and burn you too, if you stay,” they had told her.

Laila and her family had been rejected for sharing Christ in the village, so they decided to shake off the dust, pack up and leave. The family had endured many difficulties and would continue to do so, but they felt it was worth it.

It all began when Laila picked up a piece of trash from the floor.

Laila sat in a hospital waiting room while her husband prepared to undergo surgery for bleeding ulcers. He was not expected to survive, and she felt absolutely hopeless. Noticing some discarded trash under a bench, she picked up the crumpled piece of paper, smoothed it out and saw that it was a Christian newsletter sharing the testimonies of other Christians. “I wanted to find other stories like this, so I asked my sister-in-law,” she said. It turned out that her sister-in- law had also become interested in Christianity and had been secretly attending a house church. She invited Laila to come with her.

“I came right in and joined in with the worship,” Laila said. “It felt good and natural. The pastor said, ‘Jesus is alive!’ I had never heard things like this. There was an invitation for people to come for prayer, and I went immediately. I was weeping as I prayed the prayer of repentance.”

The Christians took in Laila and her children, loving them and praying for Laila’s sick husband. They told her that God might heal him. When Laila next visited her husband, he was about to undergo a fourth surgery. As a nurse, Laila knew that little could be done to help her husband’s condition, so she decided to take him home from the hospital and start praying for him.

She told her husband about her experience at the church and took him to church with her. After church members shared the gospel with him, he also accepted Christ. “We and the church leaders were sure he had been healed,” Laila said. “I went back to our village, but my husband stayed to fellowship with the Christians for a week. When he came home, I could see how healthy he was! He was joyful and full of energy, playing with the children.”

“You Are Not Our Family”

The family immediately began telling their neighbors about Christ. About a month later, the local imam came to see them and told them it was wrong of them to bring their “new faith” to the other villagers. Several people in the village even wanted them to leave. Their landlord, however, told Laila that he’d been a secret believer for many years, after coming to know Christ while in a Russian prison. He allowed the family to stay where they were living, but when he died of a chronic illness, his Muslim relatives told Laila and her family they would be evicted. The new landlords said the only way Laila’s family could stay was if they went before the village leaders to renounce Christ and recommit to Islam.

“I had learned in the Bible that Christians must suffer for the faith, so I thought, ‘Well, here it is,’” she said. “And I made my witness stronger. I shared Christ with them.”

At that point, the landlords kicked them out and told them they’d burn them inside the house if they stayed. When the couple asked for help from relatives of Laila’s husband, they were told, “If you will not deny Christ, then you are not in our family.” Laila’s brother-in-law advised Laila’s husband to divorce her and return to Islam.

Finally, Laila’s husband said, “Let’s go. We have shared the gospel with everyone in this village, so we can move to a new place.” They gathered up what they could and left the rest.

Laila and her family continue to share Christ everywhere they go. They are ready to start their own church, composed of believers who converted to Christianity after hearing the gospel through Laila and her husband. VOM is supporting them in their work. “Many people have come to the Lord through our ministry and testimony,” Laila said. “My father-in-law even came to Christ, just before he died from cancer.”

It hasn’t been easy, and their family has suffered. Their oldest son was beaten at school for refusing to memorize the Quran. The teacher hit him on the head with the Introduction to Islam book when he didn’t recite the Arabic verses well. “He kept this to himself for a long time,” Laila said. “He did not even share it with us, his family, until one day the beating was very severe. At that time, he asked me if there was any place we could go to worship God without persecution.”

Other children in the village point at their sons and chant, “Christian! Christian!” Their youngest son has scars on his head from rocks thrown by taunting children. When Laila confronted the parents of the rock-throwers, they told her it was right for their children to target hers because Laila’s family believes in “another God.”

But Laila’s family remains faithful despite these hardships. “Christ is worth it!” she said. “Blessings follow the suffering. After we suffer, we receive new blessings from Christ. And also, we follow Christ’s example — He suffered, and so we will also suffer.”