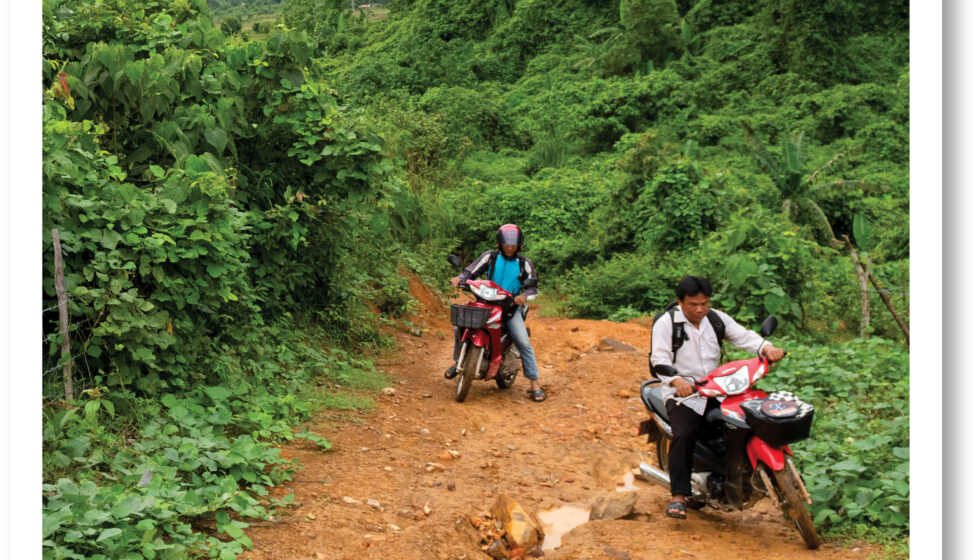 Every weekend, Linh and her husband travel five hours by motorcycle to take the gospel to a village Linh once feared.

The village, known as a “Communist hero village,” was home to a number of soldiers who died fighting against the United States in the Vietnam War. The villagers take great pride in the fallen heroes from their community and deeply treasure their communist way of life. Many of the villagers lived there during the war and remember those who died.

In a country where most of the population practices ancestor worship, the veneration of those who fought and died for communism is considered a sacred duty. The fallen heroes are viewed by some to be guardian spirits of the village, and their memory is invoked to promote nationalism and communist pride.

Initially, Linh’s husband didn’t want her to work in the village; he was afraid she would be arrested. Over time, however, he felt compelled to support her, and he continues to pray for her success. Although he travels to the village with her each time, he stays with the motorbike as Linh shares the gospel.

Not just anyone can enter the Communist hero village Linh visits. She gained permission in 2007 only because her husband had grown up there. And those living in hero villages must have had at least one family member who served with distinction during the war.

“It’s hard for a stranger to come into the village,” Linh said, “but if you have friends or relatives in the village you can come through them. They still observe you and … what you are doing.”

Linh’s family also has ties to communism. Her father was a loyal Communist Party member and colonel in the Vietnamese military. But when he and Linh’s mother became followers of Jesus, the military kicked him out.

Growing in Boldness in Vietnam

Linh developed her boldness and passion for evangelism through a VOM-supported, two-year discipleship training course that she completed in 2005.

On weekends, Linh goes house to house in the Communist hero village sharing the gospel with everyone — male or female, young or old. She works to establish and build relationships with them, understanding that she is not selling something but rather sharing Someone — Jesus Christ.

“Before I enter a house, I pray for the family inside,” she said. “If they are willing to accept Christ, I lead them in prayer. If not, I leave.”

If they do accept Jesus, she returns regularly to pray with and encourage them, teaching them worship songs and Bible basics. Many who initially reject the gospel become interested later, after their neighbors have accepted Jesus.

Since 2007, when Linh started visiting the village, more than 300 people in the village of about 1,000 have accepted Jesus.

“Before, nobody in that village accepted the Lord,” Linh said. “There were no Christians. That is why God moved me to go there. Even though I was scared, I saw many lost people there, so I knew I must sacrifice myself to preach the gospel.”

Arguing that Christianity is an American enemy of communism, authorities have repeatedly warned Linh that they will arrest her if she continues to preach the gospel and bring Christianity to the village.

But Linh is unmoved in her determination to share God’s gracious gift of salvation. “If you want to arrest me, then arrest me,” she tells them. “I am doing nothing wrong.”

Linh varies the times and days of her visits so authorities won’t know when to expect her. She does her best to avoid villagers who oppose her and report her to the authorities, but she remains kind and loving when confronted.

“Through persecution, my faith in the Lord has become stronger,” she said.

Linh has two sons and two daughters ranging in age from 16 to 22, as well as one grandchild. She misses them every weekend.

“My children back home don’t have me during those days,” she said, “so that’s a challenge.” She knows, however, that the sacrifice is worth it; her work is leading people into a relationship with Jesus.

Linh is now leading dozens of new Christians — most are about 20 years old — through the same discipleship course she completed. She has also started a house church in the village. On average, about 50 believers gather for worship each Sunday, meeting in different homes each week to avoid detection. Increasing persecution from other villagers has kept the group smaller than it could be.

In 2016, relatives of Linh’s husband gave the couple a piece of land in the village so they could establish a banana farm and eventually live and work there. Although they have not yet built a home on the land, they have recently begun staying with villagers through the week as they prepare to farm the land. The harder Linh works to expand God’s kingdom, the more supportive her husband becomes of her work.

Linh asks us to pray that she will be able to continue sharing the gospel in the Communist hero village, especially when she is tired or misses her family. And she also asks us to pray for those who have not yet accepted Jesus.