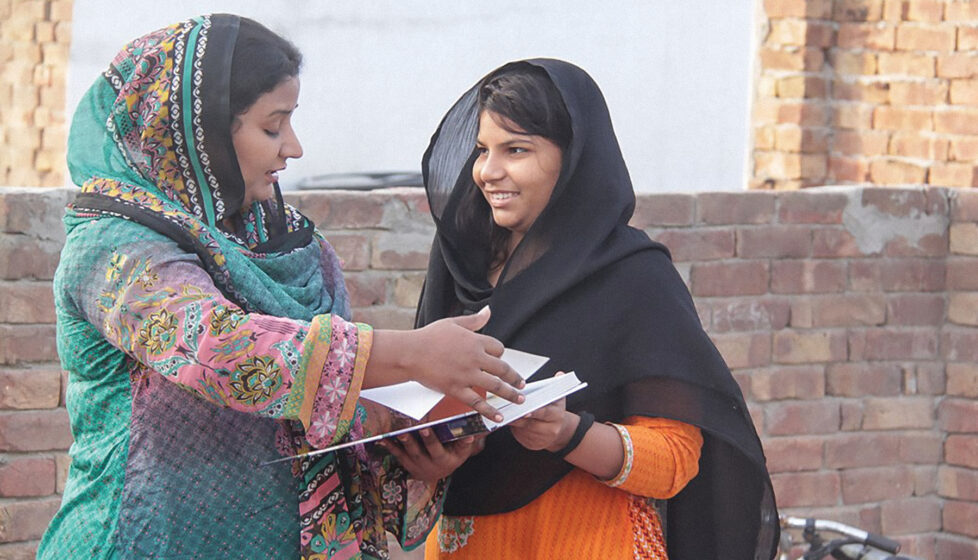 Both Anam and Rania have suffered greatly because of their Christian faith, but their work among persecuted Christians has brought unexpected healing from deeply rooted hate.

As one of Pakistan’s Christian minority, Anam experienced persecution and harassment throughout her life. And for much of her life, she had an understandable hatred for her persecutors.

“I started to hate Muslims after my uncle’s death,” she said.

Anam looked up to her Uncle “Naimat,” a smart schoolteacher who had always encouraged her in her studies. They shared a love of poetry, and Anam hoped to be just like him when she grew up.

Naimat, the only Christian teacher working at his school, tried to stand up for his students’ best interests. When his Muslim colleagues sent students on personal errands, Naimat intervened and told the students to use their time wisely on their studies. After he was eventually promoted to the position of school principal because of his exemplary work, Naimat’s colleagues became deeply jealous. They hated him so much, in fact, that they hired a hit man to kill him, telling the killer that Naimat had blasphemed the Prophet Muhammad.

On Jan. 6, 1992, the hired killer stabbed Naimat to death as he left his office. Anam, who was 11 at the time, blamed all Muslims for her uncle’s death.

After graduating from school, Anam began looking for a job to help support her family. Pakistani Christians often struggle financially because of limited job and educational opportunities, and the only job Anam could find was at a travel agency owned by a Muslim man. Although she needed the job, she quit on her first day of work when the owner tried to molest her. Anam’s opinion of Muslims was reconfirmed.

“I came to know many things about persecution and blasphemy, and how Pakistani Christians bear this cross,” she said. After months of unemployment, Anam was hired as an office manager for a group assisting persecuted Christians. The new job fulfilled her desire to do something to help persecuted believers in Pakistan.

Through her work with persecuted Christians, Anam also experienced a surprising change of heart toward Muslims. As she began to understand that persecution is to be expected by those who follow Christ, she stopped hating her persecutors. She stopped blaming every Muslim for her uncle’s death, replacing that resentment with passion for her work and a desire to see Muslims come to know Christ.

“I love my work,” she said, “although it’s sometimes like a little sparrow trying to extinguish a fire in the jungle with water in her beak. … I am like this sparrow.”

Anam has served persecuted believers for more than 16 years now, and her boss refers to her as the “face, eyes and ears” of the office. She recently got married, after resisting the idea for years because she feared that a husband would want her to stop working.

“Thanks to God, I found a good husband who never stops me from my passion,” she said. “Working for the persecuted church is not my job, it’s my passion. I always remember this verse: ‘Whatever you do, work at it with all your heart, as working for the Lord, not for human masters [Colossians 3:23].’”

One of Anam’s co-workers, Rania, also has faced many hardships as a Christian in Pakistan, despite her young age. Her father, who was continually harassed by Muslim co-workers, died of a heart attack when Rania was 4 years old, leaving her mother to care for Rania and her six older siblings.

Although the family had the legal right to remain in their employer-provided housing for five years after the death of Rania’s father, their neighbors persuaded management to evict them. They were opposed to the Sunday school class that met in Rania’s home each week.

After the family resettled in another small home, their Muslim neighbors again began to harass them because of their weekly prayer meetings. Then, on the night of April 23, 2007, someone set fire to their home. They escaped alive but lost everything — birth certificates, ID cards, her older brother’s thesis research and Rania’s school uniform.

During the next few years, two of her older siblings completed requirements for their bachelor’s degrees, but they were refused diplomas because they were Christians.

Today, Rania works as a bookkeeper in the office with Anam. “I understand their mission,” she said of the Christian organization. “I cannot express my feeling in words of how happy I am to be serving here.”

These two women have endured difficult circumstances because of their Christian identity. But instead of remaining filled with hate, they are being transformed by Christ. Today they can truthfully say they love Muslims.

Because of their personal experiences, they are deeply empathetic toward the believers who come through their doors. Many are at the lowest points of their lives, having suffered traumatic attacks and lost homes or loved ones.

Like many others who serve their persecuted brothers and sisters, Anam and Rania are allowing the Lord to use the “bad” things in their lives for His eternal glory.