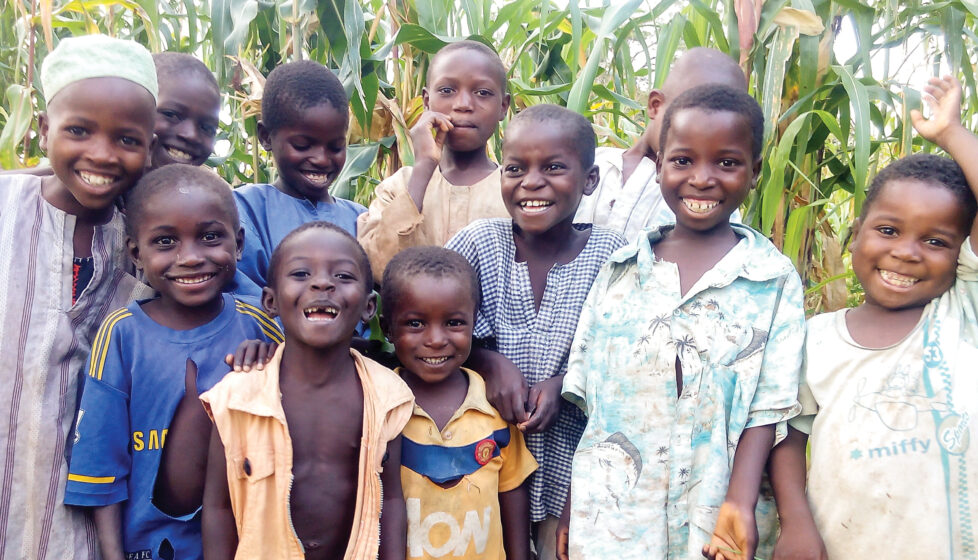 Despite being threatened with death and disowned by family members, Dawo was determined to share the gospel with the Fulani people. And his determination hasn’t wavered since losing his brother.

The day after Dawo’s cousin burned Dawo’s Bible and kicked him out of the house, 20 young men surrounded the new believer, wrestled him to the ground and tied his hands and feet together with rope. When he had placed his faith in Christ three days earlier, he couldn’t have imagined that what he was about to endure would change so much for so many.

As a member of the Fulani people group, it was assumed that Dawo was and would remain Muslim. He had moved in with his cousin in a large city in Bauchi state, Nigeria, intending to enroll in an Islamic school. However, his path was radically altered by a series of vivid dreams in which he saw heaven and encountered Jesus. Prompted by the dreams, he used the little money he had to purchase a Bible and learn more about Christianity. What he learned led him to abandon his traditional Fulani religion to follow Christ.

Moved by the realization that he had received salvation, he declared himself ready to die for Jesus. He understood that his new faith would cause trouble among the 99 percent Muslim Fulani people, but he didn’t expect it to come so soon.

The young men who bound Dawo hand and foot feared that he might lead others away from Islam. Therefore, they decided to eliminate the threat.

“I am not afraid to die right now,” Dawo told them when he learned of their intentions. “I saw where I am going, so I am happy to leave this body. Just cut my neck. Final act, I am gone. I am afraid only that you can’t get a chance to get the salvation I have.”

A crowd gathered to watch as one of the men holding Dawo began to cut the side of his head with a knife. Just then, a police van pulled up and everyone scattered, leaving Dawo alone, bound and wounded.

“What is wrong?” the officer asked.

“I am a Christian,” Dawo replied. “I just found out I am forgiven. I did not insult anybody. I did not release any bad thing against anybody, but they want to kill me.”

“I am happy you have found salvation,” the officer responded. “I am the only Christian police officer in this vehicle now. My boss is a Muslim. I don’t want him to find out what is going on.”

The officer took out some of his own money and slipped it into Dawo’s pocket.

Since that moment, Dawo has dedicated his life to spreading the gospel among Fulani Muslims and serving his persecuted brothers and sisters. He has experienced the joy of seeing God work in the heart of a Muslim, but he has also experienced severe emotional pain and loss — including the loss of his brother.

Dawo immediately began to use his Fulani background to witness to Muslims, leading many to Christ. As the first in his fellowship of Christian Fulani to experience persecution, he feels called to share the gospel with his Muslim neighbors one at a time.

He has spent years translating Bibles into Fulfulde for the Fulani, and he regularly works to build relationships with his sometimes distrustful neighbors. The Fulani are semi-nomadic herdsmen and farmers who live in temporary settlements and are very protective of their cattle. During harvest season, families live in small huts in village compounds. During the dry season, men leave their families and take their herds to better grazing grounds.

Although the Fulani are devout Muslims, they sometimes engage in fortunetelling and various animistic practices. They also brutally attack Christians for various reasons. Often, it’s because they perceive Christians as infidels, but sometimes it’s simply because they want the Christians’ land for their cattle. In addition, when a cow gets injured, they commonly blame someone outside their tribe.

In 2015, Dawo partnered with VOM to help provide practical and spiritual assistance to new Fulani believers facing persecution. The gospel has since spread quickly among the Fulani, due in part to his ministry activities. More than 800 people, including 400 from Dawo’s clan, have accepted Christ, joining the very small minority of Fulani Christian converts in Nigeria.

Many have come to Christ through the JESUS film. Dawo takes a battery- powered DVD player and looks for groups of Fulani Muslims, sometimes up to 20 people, to watch the movie with him. He and others also share the gospel through MegaVoice audio Bibles provided by VOM.

“They will hear the Word and they are like, ‘Is that really what Christ says? I want to know more,’” Dawo said.

Others come to Christ after being served by Christians. When Dawo and other believers become aware of tension between tribes, they respond with love in the form of food and blankets.

“If they are Muslim, they don’t know love like this, so some of them come to Christ through that,” he said.

Once Fulani people come to know Christ, they’re often completely dedicated to living — and even dying — for Him. They understand and expect persecution. With Dawo’s guidance, they learn how, as Christians, they should respond.

“They want everybody to know, ‘You can leave this body at any moment, so live life [as] if in the next second you will leave this body,’” Dawo said of the Fulani Christians he has worked with. “‘In everything you do, love your neighbor as yourself, and even those who are coming to kill you, try and love them more than you love yourself.’ Those are the teachings they are trying to pass to their children every day.”

While raising cattle and adhering to a strict Islamic life were their primary concerns before, their sole interest as Christians is advancing the gospel.

“Most of them will tell you, ‘Look, I just don’t want myself to enjoy the salvation; I want my family to know Christ,’” Dawo said.

Muslims who come to Christ typically focus on sharing the gospel with family members first, preferring to build a relationship for at least a month before discussing Christ with someone outside their family.

Their devotion to Christ has attracted continual persecution. The Christian fellowships in Dawo’s network are attacked about five times a year, and some have even had to go into hiding. One man had his home burned down and his two sons abducted by Fulani militants.

“They believe they have to face these things and believe they want to have a better home after they leave this body,” Dawo said. “They’re always praising God in that and always trying to be happy. If you go to the fellowship, the main lesson they are teaching their children is, ‘You have to try always to love those who hate you.’”

Dawo lives out that lesson himself, even when the persecution again became very personal and painful.

On Sept. 4, 2015, Fulani Muslims raided a Christian village where Dawo’s younger brother, Sa’idu, 28, lived with his wife and four children. Shouting and gunfire alerted most of the villagers to the attack, allowing them to flee into the mountains, but Sa’idu paused when he heard a neighbor’s 8-year-old daughter crying for help. Sa’idu, who led a fellowship of Fulani believers in the village, rushed to save the girl, but he was caught by the attackers and beheaded with a machete.

No other members of the fellowship died in the attack, but the young girl was never found.

Before Sa’idu was killed, two fellowship leaders heard the Fulani herdsmen say, “Just deny Christ. Just become a Muslim and we will not kill you.” Sa’idu responded by saying, “Christ loves you, too. Even if you beat me, I forgive you.”

Dawo misses his brother, but he also sees a renewed faith in Christ among his believing relatives.

“The fellowship mourn him, but at the end of the day they say they want to see him one day and they are telling their children, ‘You want to see him again? You have to live the life of Christ. You have to die for Him and live for Him. So don’t deny Him; just hold Christ to the end.’ Now their goal is, ‘I want to be like him. I want to live like him.’”

His sister-in-law shares the same joy, praying that she will never lose her children to Islam.

“My comfort is my children growing up in Christ,” she told Dawo.

After the attack, members of the fellowship spent three weeks hiding in the mountains. With Dawo’s help, VOM provided relief items such as food, blankets and shelter. The fellowship has since split into five camps and relocated to new areas within Bauchi state, but they still gather as a community for Bible study and fellowship.

Although they know additional attacks will occur, they wouldn’t think of leaving.

“To them, if they start running away from those who are persecuting them, how will they know Christ?” Dawo said. “They want to live a life that those people can ask them [questions]; they want to live in a community where they can be close to those people.”

Dawo serves the Fulani people. Within his fellowship network, VOM has helped distribute everything from cellphones and methods of transportation to clothing and blankets to fertilizer and cows. In addition, VOM distributed more than 3,000 audio Bibles among the largely illiterate Fulani, with plans to distribute more in the coming years.

VOM has also helped support Dawo’s sister-in-law since Sa’idu’s murder. Dawo said he hopes readers of The Voice of the Martyrs will pray for her and her four children.

“If I can tell her a lot of people are praying for them, this is more than any support they can ever get,” he said.

Even the most basic project VOM undertakes for Fulani believers is seen as a huge blessing. A believer who received rice told Dawo it meant everything to him.

“When they see the rice they spend the whole night crying, because rice is the best issue that you can get,” he explained. “Some spend five years without even seeing rice.”

While VOM’s aid improves their health and well-being, it does even more for their faith.

Dawo said he is encouraged by believers in the United States, where he understands that Christians face many temptations. He hopes they will continue to pray for the persecuted church in Nigeria.

“I can tell the brothers and sisters [in the United States] they should not give up,” he said. “I really want to see their faces one day. Maybe I will never get a chance to see anyone who is praying for me, but I want to see them one day after leaving this body. Christ said in Him we have happiness, but in the world we can have persecution. We should always learn that we have happiness in Him. What I would tell [believers in the United States] is they should continue to pray for us. We are praying for them, too.”