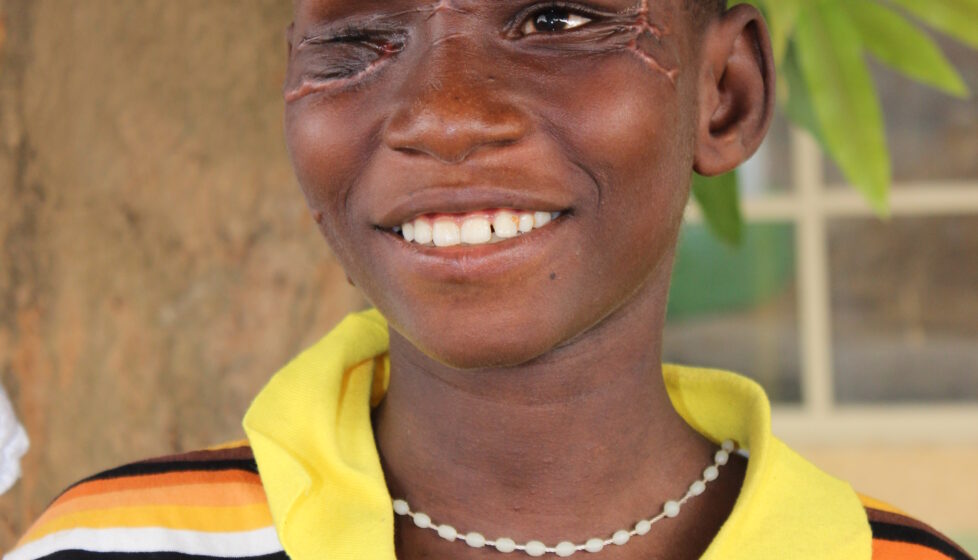 Danjuma Shakaru’s grave is still empty. Villagers had dug the 13-year-old boy’s final resting place after he was critically wounded during a Jan. 28, 2015 attack on their village. When they saw his mangled, lifeless body covered in blood, they fully expected him to die. But God had other plans.

Three months after the attack, Danjuma’s face is marked by horrendous scars where his right eye was carved out … and by a beaming smile.

Danjuma’s memories of the attack begin with the gunshots he heard at about 6 a.m. on a Wednesday morning. He remembers running for his life and then being confronted by some of the more than 1,000 Islamic insurgents who attacked his Christian village, burning homes and killing villagers who didn’t manage to escape. Although his memories of the attack are incomplete, one thing he’ll never forget is the pain caused by a machete slicing through the left side of his head.

The rest of the attack, by God’s grace, he doesn’t recall.

“Then I found myself in this situation,” he said. “I can’t remember how the story continues again.”

Danjuma can’t recall the attackers hacking at his left arm with a machete. He has no memory of them cutting out his right eye. And he doesn’t remember them cutting off his genitals.

Danjuma is among the thousands of Nigerians who have been brutalized in violent riots, bombings and village raids since 1999, when Islamists began their campaign to establish Islamic law and an Islamic territory in the north. The insurgency escalated in 2009 with the rise of the extremist group Boko Haram.

According to the research group Joshua Project, Christians make up nearly 51 percent of Nigeria’s 177 million people. More than 43 percent of the population is Muslim, while others practice one of several ethnic religions.

In spite of what he has suffered, Danjuma is certain that God is still in control. He has no anger toward his attackers.

“There is no problem,” he said. “I have allowed God to handle everything.”

Danjuma not only forgives his attackers but almost pities them for the condition of their hearts.

“I forgive them because they don’t know what they are doing,” he said, echoing the words of Christ. “If they had love, they wouldn’t behave that way.”

Following the attack, which left 23 villagers dead and 38 injured, survivors began to dig graves for those killed. Villagers had walked past Danjuma’s body and assumed he was dead, but later they heard him crying and shouting. He had somehow regained consciousness. They transported him and others with serious wounds to the nearest city, about 15 miles away.

“They couldn’t believe that the boy would come back alive after all of this,” said Hadila Adamu, a manager at the hospital where he was treated. “He bled so much. It is a miracle. That’s why he calls himself ‘Miracle.’”

Prior to the raid, Danjuma was a typical Nigerian boy. He lived with his widowed mother and enjoyed playing with friends. He often went on fishing trips with fishermen from his village. It was after one of these trips that the attack occurred.

While the attackers stole so much from Danjuma, they couldn’t take his joy. It is still evident on his face and in his voice.

“The joy comes from the Lord,” he said.

Danjuma said his relationship with God has only grown stronger since the attack. He continues to pray regularly and seek God’s guidance.

“God continues to guide and protect,” he said.

Danjuma’s life is much different now. A catheter extends from his lower abdomen, draining urine into a bag that he must carry as he walks. He is fully dependent on God, on his mother and on the care of others around him.

VOM is helping to ensure that Danjuma’s life is as whole as it can be, helping with medical costs and assisting his mother with his care. Danjuma asks VOM supporters to pray that his faith will continue to grow.

“If they hear the story, they should pray for me — for my [broken heart] and that I have strength to serve the Lord,” he said.

Danjuma hopes that any children who read his story will remember that Christ can get them through any trial.

“If they find themselves in such a situation, they should embrace God,” he said, still smiling. “They should believe that the God who created us knows everything about us, so let’s be faithful and let’s be kind. The way I find myself today … God knows the reason I am supposed to be [as I am], so you should embrace God and accept Jesus Christ as your personal Lord and Savior.”