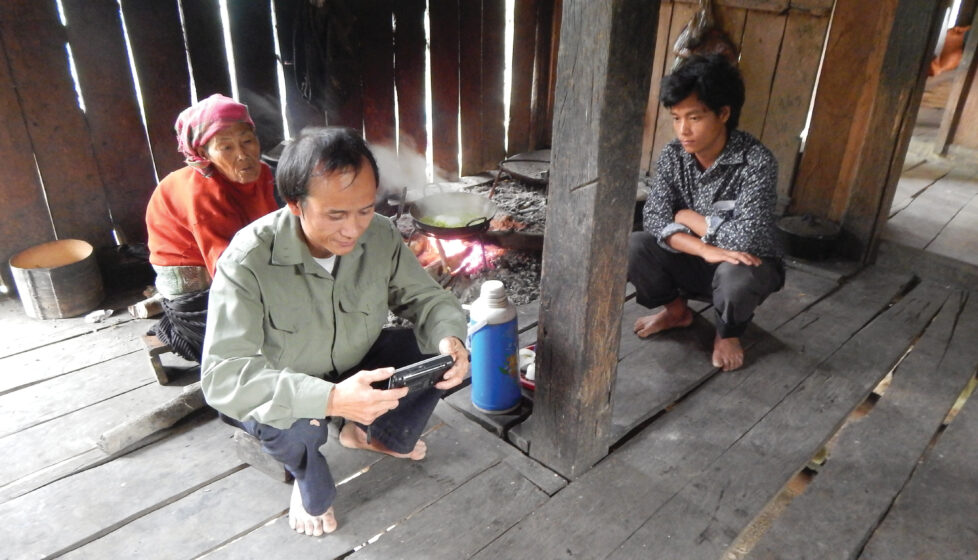 At 9 a.m. the beatings started again. Police officers dragged the two bruised evangelists out of the police station and into the village square, where a large crowd had gathered for the privilege of beating these “propagators of lies and rebellion.” As more than 100 people stepped forward to strike the evangelists, the two men remained silent. “Dog men!” jeered the watching crowd. The beating lasted for three hours.

Hy and Tan are from northern Vietnam. The two men became believers in 1996 after hearing VOM-sponsored Christian radio programing by the Far East Broadcasting Company (FEBC). The new Christians dedicated themselves to sharing the gospel with the tribal people in their area, most of whom have animist beliefs.

This area is difficult for new believers and evangelists. Believers face imprisonment at the hands of communist government officials and harassment from village leaders. Despite the obstacles, Hy and Tan regularly shared their faith. Within just two years, everyone in their village had become Christians. The two evangelists led a regular church service and continued to minister in new areas.

One day, while leaving a village where they had been working, Hy and Tan were stopped by authorities and taken to the village police station. After being handcuffed together, they were told that it was illegal to proclaim the gospel. Police officers began hitting them, punching them and even twisting their ears. The officers confiscated their ID cards and mobile phones, demanding that they stop evangelizing.

When police learned that three village families had turned to Christ and had given their ancestral idols to Hy and Tan to burn, they angrily told Hy and Tan to return the idols and re-establish the families’ worship of these gods. “I cannot do that,” Hy replied. “I am a Christian.” The beating continued into the night and again the following day. The evangelists’ faces swelled and their bodies ached from the beatings.

After two days of beatings, Hy and Tan were dragged into the village square, still handcuffed together. The third day of beatings would be very different. The police had invited the entire village to take part in their punishment. Some villagers kicked and punched them, while others hit them with police batons. Some of the women yanked out the men’s hair and slapped them on the face.

As the men were beaten, the villagers jeered and hurled insults. “Call upon your Jesus now to take these chains off you,” they mocked. “He will feed you — you will need no rice from the government.”

Then someone shoved a dirty pig trough in front of the men. The mob forced Hy and Tan to eat cooked rice out of the trough. Though humiliated and physically exhausted, the men remained silent.

Later, Tan said that as they received each blow, they remembered how Jesus had been beaten. That gave them strength to endure the three-hour beating. Finally, the police released them. “Our whole bodies were battered and bruised, and we ached all over,” Tan recalled. “My face was so swollen that I could not see out of one eye.”

After returning to their families, Hy and Tan were immediately taken to a hospital, where they spent seven days recuperating. Once home, they received a document from village officials warning them that if they returned to the village, they would be killed. Both men refused to sign the document. Knowing that the new believers in the village were likely under great pressure, Hy immediately called to reassure them. “I still want to come visit you,” he told them. “But we will have to come secretly.”

Since it is too dangerous to travel to the village on a regular basis, Hy often encourages the new believers by praying with them and reading the Bible to them on his cellphone. During a phone call in 2015, the believers told Hy that another family from their village had placed their faith in Jesus.

Throughout areas of Vietnam where Christians face persecution, VOM helps train evangelists like Hy and Tan and provides Christian DVDs, literature and Bibles for distribution. We also provide support to the families of men and women imprisoned because of their faith and help families who are evicted from their villages after becoming Christians.

Though Hy and Tan can no longer visit the village where they were beaten, the testimony of their faithfulness is still reaching people there. A family that witnessed the evangelists’ brutal beating traveled to their village to speak with them. “Vien,” who was seriously ill, came to ask if his family could receive salvation and healing. The evangelists and their church prayed for Vien, and he recovered from his illness. He is now healthy and actively shares his testimony with others in his village.

When a VOM worker asked Vien if he would ever leave the Christian faith, he replied, “No, I would not. Even if it meant I had to die, I would not leave Jesus. Even if I were evicted from the village, I still believe that Jesus would take care of me and my family.”

Get more stories like Vietnamese Believers Beaten for 3 Days, Do Not Deny Christ with a subscription to VOM's Award Winning Magazine