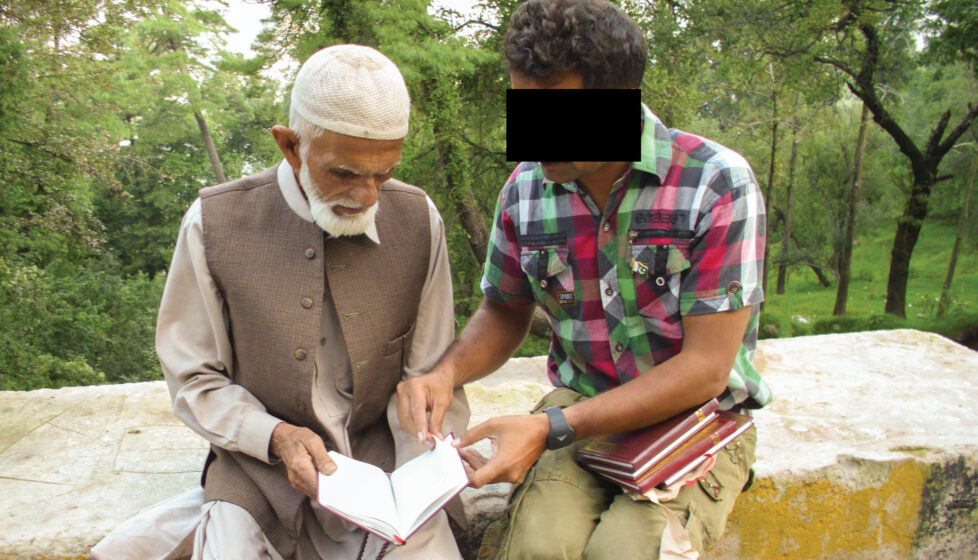 As a member of Pakistan’s tiny Christian minority, Hamid was treated poorly by Muslims in his community. By God’s grace, however, today Hamid loves and shares Christ with his persecutors.

Growing up, Hamid Banday had every reason to hate the Muslims in his Pakistani village.

His Muslim classmates bullied him, and villagers harassed and discriminated against his family because of their Christian faith. Village authorities even denied them use of the local water well during peak summer heat.

Hamid never saw a reason to show love to Muslims … until he realized God had told him to. With God’s guidance and help, he now tries to see Muslims as God sees them, as people made in His image who are in need of a savior.

“I think I am learning every day not to hate Muslims,” Hamid admitted. “Sometimes, you know, these feelings are very much grounded inside me from my childhood. Every day I try to overcome these feelings. Somehow I am often successful through His grace, but every day I pray, ‘God, remove the hatred from my life.’”

Hamid is among the fraction of 1 percent who know Jesus in his village. The other 99 percent view Hamid as an infidel. Many of the Christians he knows, including children, endure oppressive lives performing slave labor as brick makers. As members of the minority religion, Christians are considered expendable no matter their age.

Many Christians have been falsely accused under Pakistan’s blasphemy laws, which provide penalties ranging from fines to the death sentence for convictions of blasphemy against Islam, the Quran or Muhammad. Since Islam is constitutionally recognized as Pakistan’s official state religion, Christianity is seen as a threat to Islamic authority.

Throughout the years, Hamid and his family have experienced persecution in many forms. Threats and attacks were common when he was younger, but the continual isolation and contempt were the most difficult to endure.

“It was like a leper walking through the streets of Judea,” he said, recalling his childhood. “That is my background.”

Hamid’s father, a doctor, was the focus of persecution in his family. Following a religious debate with a Muslim cleric, he was banned from the village for several months. The ban was announced over the loudspeakers of local mosques, and villagers were told to shun the family.

Hamid’s father also stood up for other persecuted Christians. After Muslims stole property and livestock from poor Christians in the village one year, his father filed charges against the thieves, and the court eventually ruled in favor of the Christians.

That boldness, however, came with a price. One night after seeing a patient, Hamid’s father was attacked on his way home by a group of Muslim men. The assault was in apparent retaliation for his pursuit of justice in the case of some men who had abducted the young daughter of a Christian family.

Despite his father’s strong Christian principles, Hamid’s own life didn’t reflect Christ. As a teenager, he lied, swore, skipped school, chased girls and stayed out all night. Hamid even stole money from his father’s medical clinic, and villagers often complained about his behavior.

“You are a shame for the whole family,” Hamid remembers his father telling him.

A sense of emptiness gradually overwhelmed Hamid, leading finally to an attempted suicide by overdose of prescription drugs. After spending two days in the hospital, he realized he had to change.

A friend introduced Hamid to a local pastor, who encouraged and prayed for Hamid. With repeated visits, Hamid grew increasingly interested in Jesus. He even began to attend church.

“One night when the pastor was speaking, God spoke to me,” Hamid recalled. “He said, ‘I love you. I have given my Son for you. Why don’t you come to me?’”

Hamid began to cry, and when the pastor gave an altar call Hamid raised his hand and walked forward. A few days later, on Nov. 28, 1999, he was baptized.

For the next year, Hamid accompanied the pastor as he witnessed to Muslims in villages throughout Pakistan. As he carried the pastor’s bags from one village to the next, he saw Christ’s love in action. He wanted to learn from the pastor, but he held a lingering hatred of those the pastor was serving.

A year later, Hamid began attending a Christian boarding school, where he often spent time with friends praying for various missions organizations and churches. The longer he was there, the more stories he heard about Christians reaching out to Islamic nations.

When Hamid started college, he sensed God speaking to him again, and it wasn’t something he wanted to hear.

Hamid started having dreams about himself talking to Muslims. Although initially confused, he eventually felt that God was telling him something: “Take the gospel to Muslims.”

“That hatred turned into bitterness, and it blocked my thoughts,” he said. “So I asked God to remove that bitterness and hatred. He did that, and I started recognizing that He had given His life for everybody: Muslims, Hindus, Buddhists, everybody.”

After graduating from college in 2004, Hamid applied this new understanding to ministry work. He began reaching out to Muslims through full-time work with a large missions organization based in the United States. Many Pakistani Christians criticized him, saying he should focus only on teaching other Christians. Despite their criticism, Hamid remained obedient to what he considered his call.

To prepare for ministry work among Muslims, Hamid studied both the Bible and the Quran so he could better relay the truths of Christianity to them. He knew that most Muslims have misconceptions about Christianity.

Then, one day at a park, he approached a Muslim to share about Jesus for the first time.

“I was very scared,” he said. “By the grace of God I got my first conversion in 2004, from a Muslim background, and then another one, another one and another one. The more I talked to people, the more I got boldness.”

Hamid often began these conversations by opening the Quran and reading passages that identified Jesus as a prophet. Then he would open the Bible and discuss what it said about Christ. To his surprise, this method worked better than he expected. While some rejected him, others appreciated the discussions.

“Before talking to Muslim people, before learning this methodology, I was a cat; then God turned me into a tiger,” Hamid said excitedly. “God gave me boldness. The more you speak, the more your fear is fading away.”

In October 2005, a massive earthquake struck northern Pakistan’s Kashmir region, killing more than 100,000 people, including 19,000 children. About 140,000 others were injured, and more than 3.5 million people were left homeless.

Although Hamid was still learning how to discuss Jesus with Muslims, the earthquake reaffirmed his desire to witness and minister to those who were once his enemies. After putting his master’s degree program on hold, he volunteered with a U.S.-based Christian organization that was serving earthquake victims. The work was so demanding that Hamid and other workers sometimes slept for only two hours a night. But that didn’t prevent him from continuing to share the love of Christ with families affected by the earthquake.

One night he stayed up late discussing salvation with an 18-year-old boy. At the end of the conversation, the young man said, “After hearing your words, I feel as if my father was lost in the jungle and I found him.” Hamid then shared the story of the Prodigal Son, explaining that we are the ones who are lost, not our Father. The boy prayed with Hamid and placed his faith in Christ.

“Those areas were considered the most hostile toward the gospel before the earthquake, but as long as the earth opened up its mouth, the hearts and minds, homes and streets were also opened for the gospel,” Hamid said. “I remember building temporary shelters for the victims, sharing Bibles with them and praying for the comfort and peace of the Lord in their brokenness, and even weeping and crying with them. Nobody refused to receive relief supplies — such as food, tents, medicine, blankets and utensils — from us, nor did they deny hearing the gospel from us.”

The more Hamid served Muslims, the more he grew to love them. At the same time, he was developing a passion to see other Christians trained in Muslim outreach. He soon began training believers in other parts of Pakistan, and as Muslims were drawn to Christ he started forming cell churches that met in secret locations.

Resisting the Pull of This World

As the cell churches grew in size and influence, American missions organizations learned of Hamid’s devotion to reaching Muslims. Several years ago, he was invited to spend three months in the U.S. to work with Christian converts from Islam. While in the U.S., he enjoyed all the comforts of American life, a new ministry in Texas and the opportunity to teach at a large university. He even helped plant a church for former Muslims.

Near the end of the three months, people began trying to persuade him to stay. “This is your home,” they said. “This is your job. You should stay here.”

While their offer was attractive, it didn’t fully align with Hamid’s calling. He felt God calling him back to Pakistan to share the gospel with his Muslim neighbors. As he prayerfully continued walking the path that God had set before him, many Pakistani friends in the U.S. told him returning to Pakistan would be a mistake.

Again, however, he felt that his friends’ advice was contrary to God’s leading. And he sought God’s voice above anyone else’s.

“I continually felt compelled by an inner voice to go back and reach those who do not know the Lord as their savior,” he said. “I also wanted to train and encourage the local believers who stayed away from the majority population out of ignorance, lack of knowledge of ‘the other,’ or due to hatred and bitterness.”

Then came another test. During his time in the United States, two prominent Pakistanis, Punjab Governor Salman Taseer and Minorities Minister Shahbaz Bhatti, were assassinated because of their support of religious minorities and opposition to Pakistan’s blasphemy laws.

“I had good reason to say, ‘I don’t want to go [back],’” Hamid said, “but still God was talking to me from inside. Something was pushing me: ‘Go back. Claim those people. Think about the 98 percent Muslim people who don’t know me.’”

At the end of his three months in the U.S., Hamid returned to Pakistan. He, his wife and their two children now live in the village where Hamid grew up, but their return wasn’t easy. The financial support he had once received from the local church wasn’t at first available, and he and his family struggled for a year.

Although Hamid hasn’t personally experienced persecution since returning, family members have. His father faces legal charges related to his public evangelistic work, and a younger cousin who was accused of blasphemy has been imprisoned for more than six months.

While Hamid still expects to face persecution, he believes his approach to sharing Christ has led to improved, deeper discussions with Muslims. If Muslims reject the gospel, he wants it to be because they are rejecting Jesus rather than anything he wrongly added to the conversation.

“At any time, persecution can come, and I every day ask for perseverance from the Lord to bear that persecution,” he said.

Today, Hamid is continuing his education and working for a private institution to support his family and his studies. His main goal, however, remains the same.

“My goal is to reach out to those who do not hear the message and also train new workers and new followers,” he said. “I get many opportunities to share the message.”