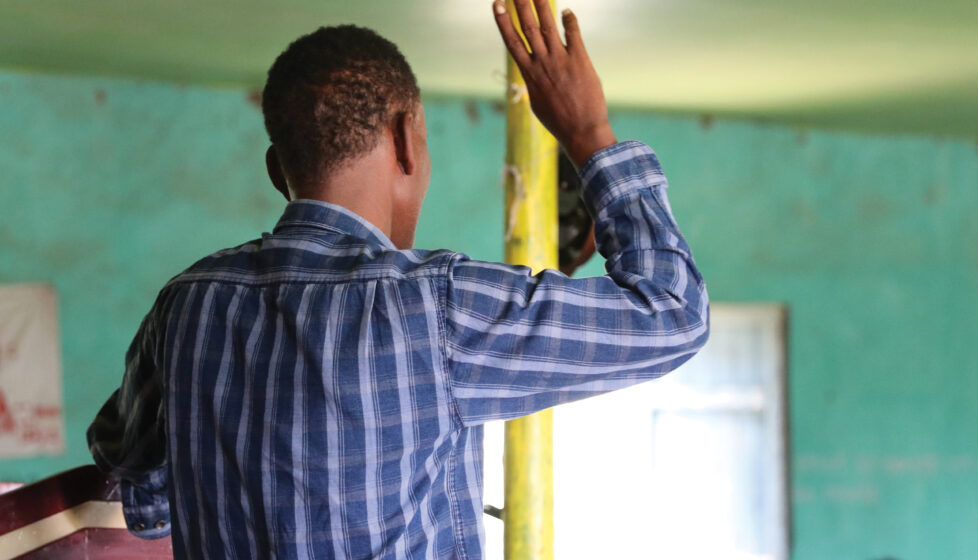 The Sheikh Who Became an Evangelist

The pastor said, “This is Sheikh Semere,” introducing his guest to the believers assembled in a concrete-block church in Ethiopia. “He was a persecutor, and one who wanted to burn churches. I brought him here so you can beat him,” the pastor said jokingly, “because the Bible says you will reap what you sow.” The congregation roared with laughter.

Less than two years earlier, a Muslim mob had destroyed their community, killing two evangelists and destroying the homes of 22 Christian families. But instead of fleeing or retaliating, the Christians chose to remain in the area as witnesses for Christ. And when they rebuilt their homes, they painted them vibrant blues and pinks so everyone would recognize the houses rebuilt after the violence. Semere, the target of the pastor’s good-natured joke, represented the very people who had attacked them.

As the pastor introduced Semere, he continued using the title the former Muslim had gained as an Islamic scholar. “God has given Sheikh Semere favor,” the pastor said, “and [the sheikh] has done far more after he believed in Christ than the evil he did when he was a persecutor. After he believed, the Muslims burned everything: his house, his possessions, his crops. But God spared his life, and God helped him to persevere. And now he has shown the way for many to believe in Christ.”

The crowd erupted in applause as Semere stepped forward to share his testimony. “I grew up studying the Quran and the Hadith,” he began. “I believed and preached that Islam was the true religion. Since my childhood, my father taught me to hate Christians. I was taught Christians were heretics, that their lives may look attractive but that is just magic they are using. Ever since I was a young man, I wanted to persecute and even kill Christians. When I became a sheikh, it was my greatest priority.

“There was no church in our area, so we would go to other villages to find and persecute Christians. We would learn who the Christians were by name before going into their areas. In just one night, we burned five houses. I led the group to burn the churches; we burned both the Lutheran and the Full Gospel churches in one spot.

“One day, we went to another village to burn the house of a Christian lady. I dragged the lady from her house, and as the rest of the group burned down her house, I beat her. I hit her so hard that I broke her arm. She began crying from the pain, but rather than curse me or yell at me, she said, ‘God bless you, my brother.’

“I was shocked. My heart was broken, and I cried for two nights. God had crushed me.”

The faces of the people listening in the pews looked somber. They knew how it felt to flee burning homes and a vengeful mob.

Semere then described how he began to experience dreams of Jesus and to notice references to “people of the book” — Christians — in the Quran. Soon after these incidents, he said, he left Islam and began to follow Christ.

When Semere told his five fellow mosque leaders about his decision, he boldly urged them to join him in following Jesus. “Because I was a leader of the community and at the same time a sheikh, I had authority,” he explained. The men cried together as the mosque leaders pressed him to reconsider.

“When I … announced my new faith to them, I knew I would be persecuted,” Semere said. “I knew, and I was ready to die for Christ.”

Although he hadn’t yet told his wife about his decision to follow Christ, she had already noticed a change in his character. Nevertheless, when she learned that he had left Islam, she was not happy about it. And his brother was so ashamed that he left the village. While Ethiopian Orthodox Christianity is the largest religion in the nation, parts of southern Ethiopia are predominantly Muslim, with societal norms similar to those of other Muslim-majority nations.

Two days after telling his friends at the mosque his shocking news, a group of Muslims armed with torches and weapons descended on Semere’s home at 1 a.m., urged on by a sheikh named Abu Salam. “Let’s kill him and destroy him so we can stop the growth of this religion in our village!” one man shouted.

Semere quickly led his wife and 10 children out the back of the house and into the jungle as more than 500 people watched his house burn, laughing as it was consumed by fire. When Semere’s wife saw how cruelly the Muslims were treating them, she and the children decided they, too, would follow Christ. “From today on, we will die for Jesus,” she told Semere.

The next day, the pastor of the church called Semere to invite him to a discipleship training class led by the Ethiopian Kale Heywet Church (EKHC) for Christian converts from Islam. And when he heard the family was homeless, he invited them all to come along.

After completing the training program, Semere returned to his village to continue the ministry to which he felt called. Unfazed by his Muslim neighbors’ violent behavior, he built a church directly between two mosques. “My vision is that eventually those mosques will become churches,” he said.

Since his return to the village in 2016, more than 120 people have come to know Christ, including most of Semere’s extended family. Even Abu Salam, the sheikh who had directed the burning of his house, placed his faith in Christ. He and Semere now study the Bible together.

Concluding his testimony at the church, Semere reaffirmed his decision to share in the sufferings of Christ. “I know that the way of Jesus is not easy and that it will bring persecution,” he said, “but I’m so happy to live and to die for Christ.”

Get more stories like Former Ethiopian Sheikh Burned Houses; Own House Burned After Conversion with a subscription to VOM's Award Winning Magazine