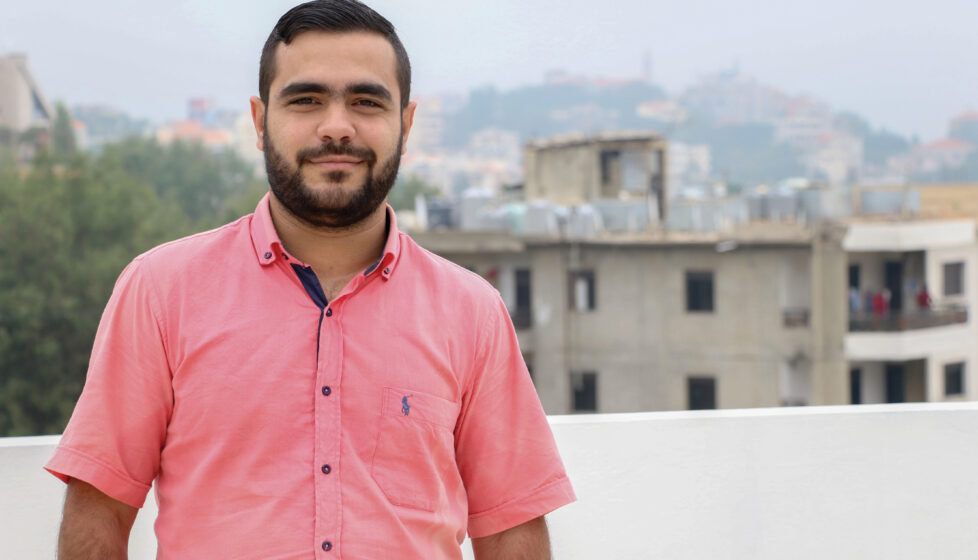 Jaffar’s maimed leg throbbed as he sat awake in his room in the middle of the night. The 23-year-old Iraqi felt the burden of his loneliness and depression like a physical weight on his shoulders. His friend was dead, and his faith was gone. In desperation, he challenged the Creator of the universe: “If you are there, show yourself!”

Exhausted from pain, frustration and weeping, Jaffar finally fell asleep. It was then, he said, that he experienced an amazingly detailed dream. Jaffar said he dreamed that he was perched on a narrow bridge wide enough for only one. Beneath him was an abyss of smoke and fire, radiating heat upward. He could hear the screams of others behind him as the bridge crumbled beneath their feet and they plunged into the gulf below. Terrified, he took one careful step after another.

After reaching a door at the end of the bridge, he knocked and a man in a white garment opened the door. “Who are you?” Jaffar asked. The man told him he was the owner of the door and invited him in. He warned Jaffar, however, that if he stepped through the door, he could never go back out. Knowing what was behind him, Jaffar stepped over the threshold. Inside, he saw fruit trees and vast spaces of green grass. People smiled at him as angels played trumpets. The man in white walked ahead to seat himself on a golden throne inlaid with dazzling blue jewels. Jaffar said he was filled with a deep peace.

Then he woke up.

As a dedicated Shiite, the smaller of Islam’s two main branches, Jaffar joined the fighting in Syria in 2014 against the Sunni-led self-proclaimed Islamic State (ISIS). He became quickly disillusioned, however, when he saw Shiite militia leaders stealing the salaries of their men and when his best friend was shot to death. Just 45 days into his contract, Jaffar was injured in a mortar attack and forced to return home, broken in body and spirit.

He spent the next few months enduring both physical and emotional pain, leading to his late-night encounter with the man in white. Although the first dream was soon forgotten, three months later the dream reoccurred — the same bridge, the same man in white and the same invitation to enter the safe, peaceful place. “I woke up afterward,” Jaffar said, “and started thinking, ‘Who is this person who came to me twice?’”

He began his research with traditional Shia teachings before soon discovering a weekly TV program by a Moroccan Christian apologist. “After three weeks of following his teachings, I rejected Islam completely,” Jaffar said. “I was convinced that Islam was not from God.”

Still, when the time arrived for the most significant Shia festival (when Shiites mourn the death of Muhammad’s grandson, Imam Hussein ibn Ali), Jaffar felt compelled to participate. “Hussein is more important than [Allah] in our Shiite religion,” he said. “People may deny [Allah] or blaspheme against [Allah]; it might be tolerated. If you say something about Hussein, you will lose your tongue.”

The Shia ceremonies involve mourning and self-flagellation so extreme that participants bleed. And although Jaffar had rejected Islam, the rituals were still part of his identity. “You see friends, and you hit yourself and you are part of the crowd,” he said. “After that, you can show off … flexing your muscles when all the girls are watching.”

But his hope of impressing girls never materialized. As Jaffar swung his sword wildly, the blade struck his scalp and he was taken to the hospital in a coma. Jaffar said that as he lay unconscious, he felt like he was hovering above his body, watching his mother and father cry. Then, after hearing footsteps behind him, he saw the man from his dream. “Why are you crying?” the man asked him. Jaffar explained that he didn’t want to leave his mother. Then he suddenly woke up.

When he told his parents about the dream, his father declared, “It was Imam Hussein who appeared to you and brought you back to life!”

Meeting the Man in White

After his release from the hospital, Jaffar ran into a former employer one day who asked where he had been. When Jaffar recounted his near-death experience and recurring dream, the former boss began to weep. “The man who appeared to you is Jesus Christ,” he told Jaffar, “and He wants you to be His.”

The former boss, who was a Christian, gave Jaffar a Bible and asked him to read it, starting with the New Testament. By the time Jaffar reached the Sermon on the Mount in Matthew, he was sobbing. “I was broken,” he said. “[I] had all these trials, and then I read, ‘Blessed are those who mourn, because they will be comforted.’ It spoke so much to me.”

He called the man who had given him the Bible and told him he wanted to accept Christ, and his friend happily led him in a prayer. As Jaffar studied the Bible and grew in Christ, he discovered many details that aligned with his dreams about the man in white.

He devoured Scripture, taking special comfort in Paul’s words to the Romans: “If God is with us, who can be against us?” Eager to share what he was learning, he began to post videos of himself reading and discussing Bible passages on Facebook Live. Several friends noticed how much he had changed, even his manner of speaking, and he soon led two of them to Christ.

Jaffar was afraid of his father, who had often beaten him with a hose, but in 2016 he knew it was time to tell him about his conversion to Christianity. With his passport and wallet in his pocket in case he needed to flee, Jaffar told his father that he had begun attending church and that the man in his dreams was Jesus Christ, not Hussein Ali. His enraged father beat him with a windshield wiper until he dislocated his own shoulder and could no longer beat him.

Jaffar fled to an uncle’s house, but his father came after him. After managing to escape over the roof of the building, he headed for Baghdad, where he continued to post Facebook Live videos. When his former Shia militia unit learned of his conversion, they sent him a threatening message: “You are a dirty apostate, an infidel [dog]. You are insulting our leader, Hussein Ali. We will kill you and hang you on a cross just like your God. We will find you soon.”

For the next year, Jaffar moved from place to place, continuing to produce his Bible videos. Finally, with no place left to go, he decided to leave Iraq for a nearby country. On Oct. 23, 2017, he arrived in a foreign country with just $100 in his pocket. Although he was safe, he was also an unemployed refugee. He eventually found a job working 16-hour days in a supermarket, but his leg — permanently damaged in the ISIS mortar attack — couldn’t hold up to the long hours. Before long, he was unemployed and living in the stairwell of an apartment building.

When the pastor of a church he had been attending learned of his situation, the pastor called a VOM worker and asked for help. VOM responded quickly, helping Jaffar find housing, providing funds for rent and connecting him with a job that he is physically able to perform.

He continues to make apologetics videos about Christianity, but he has learned to present the gospel more gently. “Don’t say like I did, ‘Islam is wicked,’” he said. “Speak about the love of Christ. The Muslim does not really need you to remind him of his religion and his daily problems. He needs a new factor. We have this new factor — love.”

While Jaffar knows he is taking a risk by being so public about his faith online, he would rather risk his life than resist God’s will for him. He is even willing to return to Iraq if he feels God’s leading. “I am not in control,” he said. “God is in control. I surrender to His will, and He has a good work for me.”

Get more stories like Shiite Muslim Dreams of Jesus, Shares Christ Through Facebook with a subscription to VOM's Award Winning Magazine