Pakistani churches include believers from diverse faith backgrounds and a variety of denominations. All Pakistani Christians face difficulties, discrimination and persecution because of their Christian identity. Some evangelicals take great risks to witness to Muslims, baptize converts and gather them into churches, and many Christians are working tirelessly to equip, encourage and educate Christian youth. Some Christians boldly share the gospel and distribute Godâs Word in radicalized Muslim neighborhoods and cities, some of which are home to Islamic extremist groups like the Taliban. Most Christians are treated as second-class citizens and are forced to work long hours in labor-intensive jobs while being oppressed by schemes that keep them in bondage to their employers.

Approximately 98 percent of Pakistanis are Sunni and Sufi Muslims. Pakistan underreports its Christian population, so accurate statistics are unavailable. However, there are roughly 4 million Pakistani Christians, which is nearly 2 percent of the nationâs population.

Both Christians converts from Islam and Pakistanis born into Christian families are persecuted by their communities, Islamic extremist groups and the government. 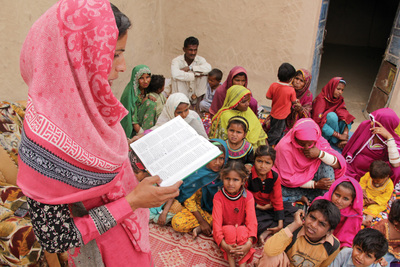 Because of Pakistanâs blasphemy laws, Christians are at constant risk of being falsely accused of blaspheming Islam, the Quran or Muhammad, and they receive harsh punishments when convicted. Street evangelism is legal under Pakistani law, and several bold evangelists take advantage of the opportunity to share the gospel publicly. Many Christians live together in closed neighborhoods known as colonies, which provide a measure of security amid the widespread oppression. Still, several large-scale attacks have occurred in these areas in recent years, including some during Christmas. Most Christians are trapped in a cycle of poor education and poverty. Often, the only jobs they can get amount to indentured servitude in brick kilns or as street sweepers or sewage workers. Christians have been imprisoned for years under the country's blasphemy laws, and many of those have been killed or forced to permanently flee the country upon release from prison.

Bibles can be legally printed and distributed in Pakistan. However, some Islamist groups oppose the Bible. Those living in rural, tribal and mountainous areas have little access to Godâs Word, and translation efforts are ongoing. Give Bibles

VOM supports outreach in difficult areas, training for local pastors and evangelists, and immediate aid to victims of persecution. VOM also supports Bible distributions in various formats, with a focus on the most difficult areas. Give to VOMâs Global Ministry